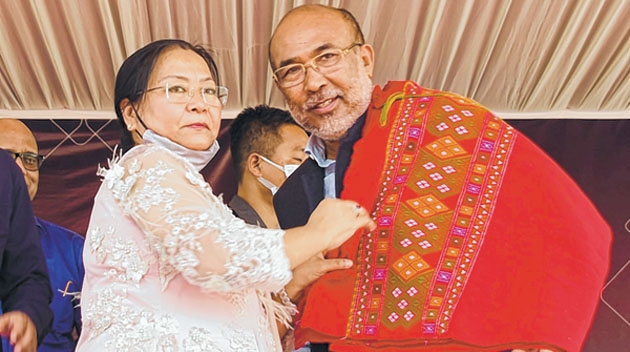 IMPHAL, Oct 11 (DIPR)
The Kangpokpi chapter of Go to Hills 2.0 witnessed a massive turnout today with Chief Minister N Biren Singh inaugurating various infrastructure projects taken up in the district. The main function was held at Brigadier Thomas Ground.
The projects inaugurated today include Pressure Adsorption Swing Oxygen Plant at District Hospital, Kangpokpi; Office of the Champhai TD block and Bungte Chiru TD block; Sadbhavna Mandap at Kangpokpi and Saitu Gamphazol; upgradation of KGBY (eight rooms) at Ekoumullam; School Fagathansi Mission at T Waichong High School and Motbung High School; pick up weir across Kounu river, Kounu village, across Haipi stream, Kharkhola village, across Gopibung stream, Gopibung village; Oak Tasar grainage building at TSF Phaijang; water supply schemes of 12 KLD each at Namthajang, Langdeibung, Ichaigojang, Longa Koireng, Haibung, Khoirok, Lairok Vaiphei and L Phaijang (Phaijol); Health and Wellness Centres at PHC Kalapahar; PHSC T Khullen and PHC Saikul; Institutional Building at PHC Saikul; Primary Health Sub Centre at Chalwa; Ante- Natal and Post-Natal rooms at PHC Saikul; construction of road from L028- Thayong to Tanthouphai; construction of bailey bridge (120 ft) span over Khujarok river at Tingkhai Khunou and transit accommodation of teachers and doctors at Kangpokpi.
Addressing the gathering, Chief Minister N Biren Singh stated that all communities residing in the State are one irrespective of different cultures and traditions being practiced and added that there shouldn’t be any mistrust and enmity among different communities. As such, the Government, since its formation, had taken up the initiative of Go to Hills and Go to Village mission to connect with its people, redress their grievances and ensure equal development, he stressed. He added that such initiative would help in restoring the trust among different communities.
He maintained that the Government had been able to provide supply of tap water to around 63 percent of the households of Kangpokpi district in the last four and half years. He added that various developmental projects had been taken up in the district even during the hard time of COVID-19 pandemic.
Around 22,781 persons had been enrolled and provided Chief Ministergi Hakshelgi Tengbang (CMHT) card and nearly 2,271 persons had availed the benefits of the card, he informed.
Stating that the Government would never go beyond the ambit of the Indian Constitution, he assured that there wouldn’t be any change in the provision of the Hill Area Committee which was already provided under the Constitution.
He further announced that the Government would consider construction of a Women’s Market (Ima Market) at Motbung very soon. He also expressed satisfaction that 32,327 toilets had been constructed under Swachh Bharat Mission so far. Assuring that the Government had always treated all sections of its people in the same way, he appealed to the public to cooperate in the development works taken up by the Government.
Maintaining that the State had witnessed growth in many sectors, he stated that all the hill districts now have oxygen generation plants and the Government is trying to develop infrastructure in the health sector in every possible way.
He informed that benefits amounting to Rs 46.34 crore would be distributed to certain beneficiaries under different schemes during the programme and various projects with an estimated cost of Rs 30 crore had been inaugurated today. Projects worth Rs 1,593 crore including road constructions are ongoing in the district, he added.
Appreciating the civil society organisations of Kangpokpi district for their continuous support towards the Government’s development initiatives, the Chief Minister also sought cooperation of the people of Kangpokpi in the construction of Asian Highway so that the construction could be completed soon in the larger interest of the State.
Works Minister Th Biswajit Singh, while delivering his speech, maintained that peace had been restored in the State with the installation of a new Government in 2017 and added that development followed only with prevalence of peace.
He stated that the Government has been working with a commitment to bring inclusive development in the State following the footsteps of Prime Minister Narendra Modi. The Prime Minister frequently mentioned that the North East could become India’s growth engine and as such the Look East Policy had been transformed to Act East Policy, he added.
The Minister also mentioned that various welfare schemes had been introduced by the Government.
Youth Affairs and Sports Minister, Letpao Haokip; Education Minister, Sorokhaibam Rajen; Tribal Affairs and Hills Minister, Vungzagin Valte; Agriculture Minister, Oinam Lukhoi; Advisor to Chief Minister (Health), Dr Sapam Ranjan; Member of Parliament, Sanajaoba Leishemba; MLAs Nemcha Kipgen and Ngamthang Haokip; Chief Secretary, Dr Rajesh Kumar; Deputy Commissioner Kangpokpi, Somorjit Salam; SP Kangpokpi, Karthik Malladi; top civil and police officials and leaders of civil society organisations attended the programme among others.