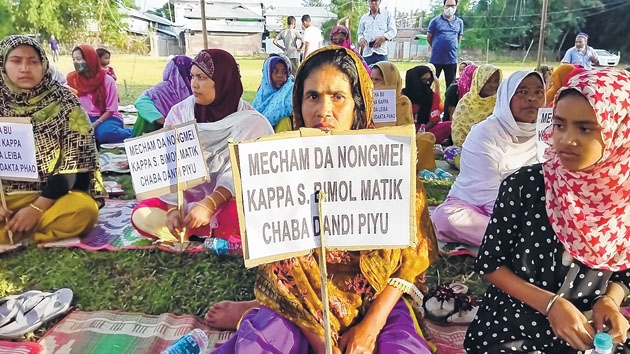 Our Correspondent
IMPHAL, Oct 12: Aftermath of the pre-poll violence at Yairipok Yambem in Andro Assembly Constituency yesterday, a sit in protest was staged at Yairipok Tulihal by the locals demanding the immediate arrest of Sarungbam Bimol, a close associate of former Minister, Th Shyamkumar who allegedly opened fire at innocent people.
Speaking on the sidelines, Md Salam, president of All Tulihal Election Committee for L Sanjoy Singh strongly condemned yesterday's incident where six persons including Md Ethemcha from Tulihal were seriously injured after S Bimol opened fire at the supporters of L Sanjoy who were carrying out a peace rally towards Yairipok Ningthounai after a political meeting at Laimang Community Hall, Yairipok Yambem yesterday.
Welcoming the Chief Minister N Biren Singh appeal not to resort to any sort of crimes in connection with election on social media, he urged the authorities concerned to arrest S Bimol who allegedly opened fire at the people and demanded that befitting punishment should be awarded to him.
Md Salam further warned that if the said demands are not fulfilled soon, the locals will resort to stringent form of agitations.
On the other hand, father of S Bimol, Sarungbam Kesho refuted the allegations levelled against his son in connection with the incident at Yairipok Yambem yesterday and strongly denounced the baseless allegations made upon his son.
He made the above statement while speaking to media persons during a press meet held at his residence at Yambem Makha Leikai.
S Kesho stated that a reception programme for Thounaojam Shyamkumar, Advisor of Chief minister N Biren Singh, was held at his residence yesterday organised by Yambem Makha Youth Development Committee  attended by the locals and womenfolk of the area.
While the programme was going on, supporters of the intending candidate Lourembam Sanjoy came and started shouting slogans such as- Entry of Th Shyamkumar is prohibited in Yambem area, Go back Shyamkumar from Yambem etc leading to a confrontation between the two groups where 6 persons suffered bullet injuries, he continued.
He further stated that his son has been allegedly held responsible for the violence that took place which is really unfortunate and clarified that his son is innocent.
He maintained that Lourembam Sanjoy had threatened his son Bimol on previous occasions over the phone as well and consequently a meeting was held at the residence of Bimol on October 9 along with the family members and associates of L Sanjoy to reach a consensus on the matter
On that day the associates of L Sanjoy also firmly stated that no political meeting of other intending candidates apart from intending candidate L Sanjoy can be held in Yambem area failing which the organisers will be held responsible for any untoward outcome, he added. In view of the above mentioned circumstances, S Kesho strongly reacted against the baseless allegation levelled on his son Bimol and life threats made by L Sanjoy.
He also cautioned that L Sanjoy will be held responsible if any fatal incidents happens with Bimol.
Lastly he sought the attention of the Government in the matter and earnestly appealed to take up stringent actions against those who are actually involved in the incident.