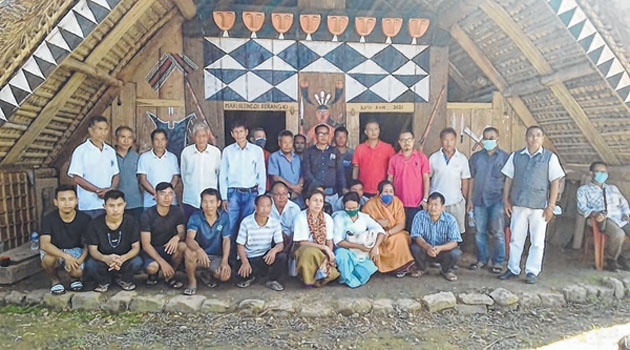 By Our Staff Reporter
IMPHAL, Oct 12 : Makuilongdi village in Senapati district, which is considered the birthplace of Zeliangrong community is in a sorry state and is lagging in developmental front.
Protection and Preservation Committee Manipur (PPCM) visited the village yesterday along with a media team to enquire about the needs and requirements of the village and found the village in a very sorry state of affairs.
Speaking to the joint team of PPCM and media persons, chairman of Makuilongdi Village Council, Disuraibou said the village is about 22kms to the west of Senapati district headquarters and is one of the oldest villages in the region. The village is divided into 5 parts with Part I populated by Zeme, Part II by Liangmai, Part III by Inpui, Part IV by Rongmei and Part V by Gorkha. The total population of the village is about 4000, he informed the team.
The villagers are mostly poor farmers and only two villagers are Government employees. Potatoes, cabbage, peas and bananas are the main produce of Makuilongdi village, he added. He also expressed gratitude to the visiting team for giving the villagers an opportunity to highlight their grievances.
Makuilongdi Village Council secretary Ebangheing said the village has a Primary Health Sub-Centre, but has no staff to man it. The villagers have to travel to Yangkhullen PHC  by passing Rajaimai and Willong villages through Kanem. As there is no road connectivity between Yangkhullen and Makuilongdi village, it takes about 12 hours by a strong man to walk the distance between the two villages, he added. And if one has to visit Senapati for treatment, they have to hire a pick-up truck or an autorickshaw by paying Rs 2500/- per trip as there is no public transport system in place.
Ebangheing told the team that the villagers had appealed to the Government from time to time to develop the road between Yangkhullen and Makuilongdi, but the Government has not done anything to sort out the problem except giving assurance. The village also has two Upper Primary Schools, one under ZEO and the other one under ADC and has one teacher each while the students are more than 200 in number. The villagers contribute money every month to pay for private teachers they have engaged in the two schools to cater to the large number of students, he added.
Maibam Bisheshore, convenor PPCM said the team had visited Makuilongdi village as a part of its mission to raise the issues and grievances of remote indigenous villages of the State to the Government. PPCM is also planning to visit remote villages along Imphal-Jiribam highway, he added.
He also assured that PPCM will do everything in their capacity to raise the issues of such villages to the authorities concerned.
After returning from Makuilongdi village, the team also visited Maram Khullen village, also in Senapati district, wherein K Namba, chief of Maram Khullen raised similar issues of neglect.
K Namba told the visiting team that lack of clean drinking water is one of the major problems of the villagers as women folk have to walk long distances to fetch water. He added that the village has a PHSC, but the constructions work have not been completed and when nurses and staff visit the centre, they have no quarter for their accomodation.