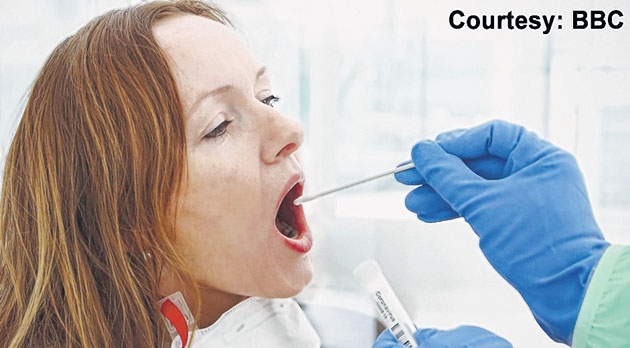 By Our Staff Reporter
IMPHAL, Oct 12 : Some hill districts continue to be a source of worry with the swinging daily positivity rate with Kamjong topping the chart with 23.5 percent as 4 out of the 17 samples tested returned positive results in the last 24 hours.
The situation at Ukhrul continue to be worrisome as the hill district returned  a daily positivity rate of 15.7 percent with 13 out of the 83 samples tested returning positive results.  Pherzawl notched a high daily positivity rate of 18.2 percent as 2 out of the 11 samples tested returned positive results. Chandel returned figure of 9.8 positivity rate with 5 out of the 51 samples tested returning positive results.
The figures in these districts contrast sharply with the overall daily positivity rate of 5.2 percent as 120 tested positive out of 2317 samples tested in the last 24 hours.
From the record of no deaths reported on October 11, Manipur saw two deaths due to the virus in the last 24 hours to take the cumulative number of deaths to 1887.
The two deceased persons hailed from Imphal East. Both of them had co-morbidities and none of them were vaccinated said the COVID-19 Common Control Room in a statement.
The 120 persons who tested positive in the last 24 hours included one Central security personnel and their positive status were confirmed at RIMS (1), JNIMS (16) and other testing centres (103).
The positive cases from amongst the general population are drawn from Imphal East (24), Imphal West (49), Thoubal (2), Bishnupur (11), Kakching (1), Ukhrul (13), Churachandpur (5), Chandel (5), Senapati (1), Kamjong (4), Noney (2) and Pherzawl (2).
On the other hand 118 persons were discharged in the last 24 hours from home isolation (40), RIMS (6), JNIMS (8) and CCCs (64).
The COVID-19 Common Control Room further said that due to various reasons 274 cases were reported as discharged only today and added that the total recovered cases is taken as 392  after reconciliation from IDSP team, Home Isolation team, Community Home Isolation team and Hospitalisation team as on October 12.
The cumulative number of recovered cases is 1,18,908 including 4284 security personnel. The recovery rate is now 97.28 percent. With the addition of 120 more cases, the cumulative number of cases now stands at 1,22,228 including 4309 Central security personnel.
Till October 11, the cumulative number of people who have been vaccinated stands at 17,86,274 including 5,53,936 who have received their second dose. A total of 652 D Type Oxygen cylinders and 174 B Type Oxygen cylinders were made available to different health centres across the State on October 11.
The number of beds available and as enumerated by the COVID-19 Common Control Room is RIMS (General beds-206, ICU-26), JNIMS (General beds-42),  CMC Koirengei (General beds-27, ICU-8), Iboyaima Hospital, Singjamei (General beds-25, ICU-5), Jivan Hospital, Kakching (General beds-20, ICU-5), Shija Hospital (General beds-45, ICU- 37), Raj Medicity (General beds-79, ICU-21).