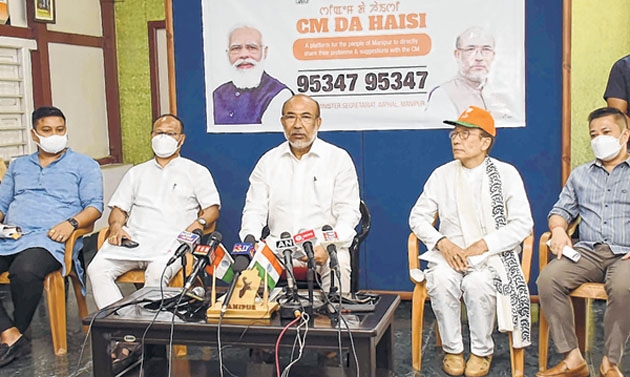 IMPHAL, Oct 12 (DIPR)
Chief Minister N Biren Singh today launched “CM Da Haisi” at a programme held at the Chief Minister’s Secretariat. CM Da Haisi is a platform for the people of Manipur to directly share their problems and suggestions with the Chief Minister.
Under the initiative, every citizen of the State can directly connect with the Chief Minister through the helpline number 9534795347 and share their grievances for speedy redressal.
Speaking on the occasion, N Biren Singh stated that the platform had been launched to make up for the difficulties faced, in door to door delivery of services under different welfare schemes, due to COVID-19 pandemic.
As the Government’s initiatives like Meeyamgi Numit, Hill Leaders’ Day, Go to Hills and Go to Village mission couldn’t be held frequently during this pandemic hour, the new platform had been introduced with the motto to facilitate contact between Government and its people at grassroots level, he added. The initiative would also encourage people’s participation in the governance and development of the State.
The Chief Minister continued that a dedicated team had been set up to work in mission-mode daily from 8 am to 8 pm and record the caller’s grievances. The team would initiate the work of redressing the grievances received by contacting Departments concerned for early resolution.
He further stated that the platform aims to reach out and engage with at least 50 percent households of Manipur in the next two to three months.
He maintained that the State Government, since its formation, had taken up various people oriented schemes and development works and had found it effective in bringing emotional integration and attachment among different communities of the State. Various initiatives taken up by the Government had been helpful in ensuring the benefits of certain welfare schemes reach its targeted beneficiaries and facilitate in uplifting their living conditions, he added.
Agriculture Minister Oinam Lukhoi, Deputy Speaker Kongkham Robindro, Sekmai AC MLA Heikham Dingo and Moirang AC MLA P Sharatchandra also attended the programme among others.