'Die-in harness applicants of Ukhrul ADC are living in debt' 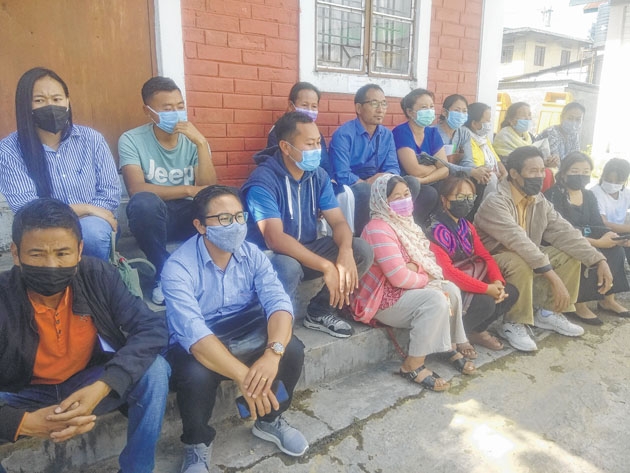 Mungchan Zimik
Ukhrul, Oct 13: The Die-in harness Applicants Association of ADC, Ukhrul (DAAADCU) has expressed strong resentment against the abhorrent attitude of two former Chief Executive Officers (CEOs) of Ukhrul Autonomous District Council (UADC).
The DAAADCU alleged that the CEOs have compelled the Die-in harness applicants to live in financial debts for many years due to their unscrupulous acts of  irresponsibilities and ill treatment.
Die-in harness applicants of ADC, Ukhrul held a conference at Ukhrul ADC office complex in Phungreitang, Ukhrul and deliberated on the issues and problems encountered by them while  pursuing their appointment orders in the District Council.
The distressed applicants alleged that the two former CEOs have altogether collected Rs 2,80,000 (two lakh eighty thousand) each from 32 applicants at two different occasions with the assurance that their appointment orders would be issued at the earliest.
"In 2015, the first collection was done by UADC cashier and again in 2017, all the applicants were asked to pay Rs 80,000, which was collected by one Assistant Inspector (AI) from 32 individuals on the pretext that their appointment order would be issued within a week", they alleged.
DAAADCU also stated that even as they approached the CEOs at various occasions about their appointment orders, they were given excuses to submit their documents again. The CEOs have been delaying the appointment orders for more than 10 years.
The aggrieved members stated that the money paid to the CEOs were taken on loan basis to get their appointment orders and were unable to repay the money while cautioning that the members were now prepared to face any challenges.
DAAADCU further appealed to the Chief Minister and TA & Hills Minister to intervene and resolve their issue, failing which the association would be compelled to resort to different forms of agitation.
The DAAADCU also resolved to pursue the matter through legal proceedings.
It may be mentioned that two applicants have already expired before getting their appointment orders.