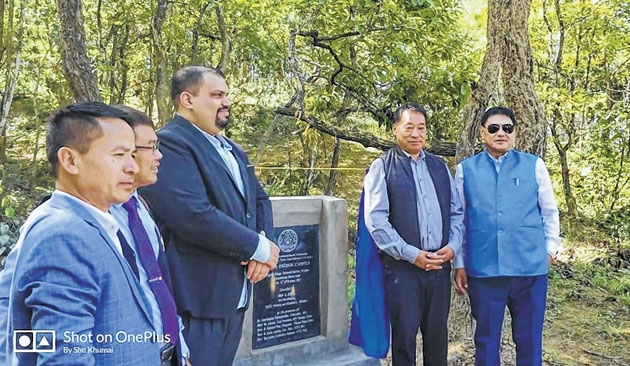 Our Correspondent
Senapati, Oct 12: PHE Minister L Dikho on Tuesday unveiled the foundation stone for Manipur International University's Grace Tsudou  campus at Tunggam village, Senapati district.
The event was attended by Dr Harikumar Pallathadka, chancellor MIU; W Joram ,vice president , NPF Manipur State; D Dailord Pao, president Poumai Naga Union; H Luny Justin, GS HTDC MIU and Ng Lorho, executive member HTDC MIU.
Speaking on the occasion, L Dikho stated that education is the backbone of the society and everyone should know the importance of education.
"It was not easy to get such modern facilities in the village and it was like a dream", said the Minister while lauding Ng Lorho for the initiative which would benefit the society at large.
The Minister expressed his confidence that the university would progress under the able leadership of Dr Harikumar and appreciated the Tunggam villagers for its far-sighted vision.
He urged the people to give full cooperation and support for the upliftment of the university and assured to provide his support to the University.
Dr Harikumar Pallathadka stated that Tunggam village is the second campus with Purul village being the first in Senapati district.
He mentioned that the DPR for purul campus is completed and construction would begin soon, however the MIU campus at Tunggam village campus may take some time.
Frontal organisations of the Poumai community including Poumai Naga Union, Poumai Tsiidoumai Me, Paomata Naga Council, Khumai Union, Tunggam village authority, MIU members and villagers also attended the event.
The programme was chaired by Avio Lorho while the invocation prayer was pronounced by Rev L Ashuli, pastor T/Afii CRC and benediction prayer by D Thepri Reo, pastor Tunggam B/C.
Ng Lorho, executive member HTDC MIU proposed the vote of thanks.