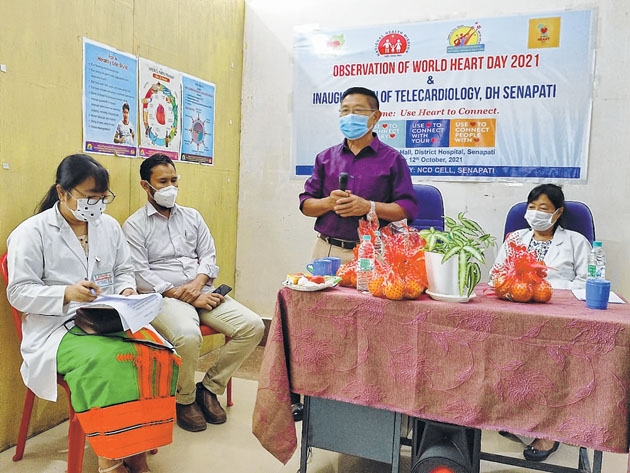 Our Correspondent
Senapati, Oct 13: In what could be termed as a blessing for the people of Senapati district, Telecardiology services were inaugurated at District Hospital, Senapati on Tuesday.
The inauguration of Telecardiology service was carried out as part of the observance of World Heart Day, 2021. It was organised on the theme, "Use heart to connect" by NCD Cell under NHM, Senapati.
The event was attended by Dr Pfokreho Pfoze, CMO; Dr M Sokha-a, Medical Superintendent, District Hospital, Senapati and Dr Mustaque Ahmed, DNO, NPHCE, Senapati as presidium members.
Dr M Sokha-a in her welcome address stated that remote diagnosis and remote treatment have been introduced in the hospital for the betterment of the public.
Dr Sumpi Percy, DNO, NCD Cell, Senapati mentioned that the programme was meant to bring the ASHAs and patients together to create awareness about the consequences of cardiovascular diseases, campaign to fight against such diseases as well as to inspire one to adopt healthy living.
The inauguration of Telecardiology at District Hospital, Senapati would enable one to check one’s heart with ease, Dr Sumpi added.
Dr Mustaque Ahmed, DNO, NPHCE, Senapati advised the people with heart related disease to come for check up at the hospital at the earliest.
He also advised the gathering not to smoke, not to chew pan, talab, to exercise regularly, eat fruits and live wisely following healthy habits, check diabetes, BP as preventive measures.
Dr Pfokreho Pfoze express his concern with the increasing number of deaths due to cardiovascular diseases and stated that about 18.8 million deaths are reported every year as per World Health Organization (WHO).
He continued that the 'Health for All' initiative of the Chief Minister’s was introduced recently in the State to carry out door-to-door health screening for NCD above 18 years of age.
Later, a clinical assessment was also conducted wherein staff of NCD Cell, Senapati took measurements of BMI & BP, estimation of Blood Sugar, Lipid profile and ECG.