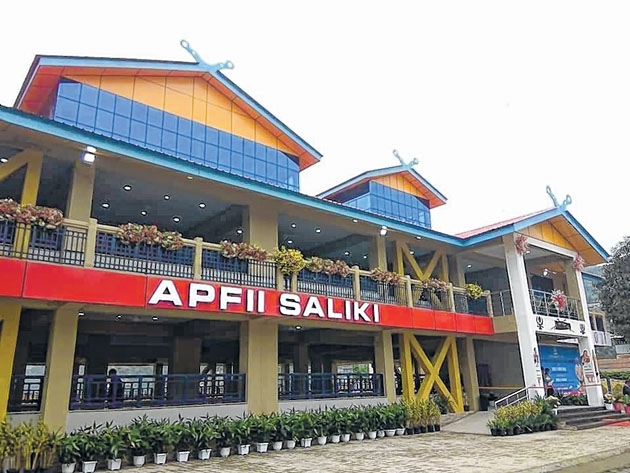 Our Correspondent
Senapati, Oct 13: The long awaited dream of a permanent vending market for the women vendors of Senapati district came true on Wednesday when A Kapani, Caretaker Chairman, ADC Senapati finally opened the Apfii Saliki (Women market).
The 'Resuming cum Blessing programme' was held in front of Apfii Saliki in the presence of S Kunguiba Thangal, SDO, Senapati/Purul; Dr Angshim Dangshawa, SDO, Paomata; Christian Home, SDO, Chilivai Phaibung, Tholu Rocky, MPS, Additional SP and town commissioners.
Speaking on the occasion, A John, president Karong Senapati Town Committee (KSTC) stated that there was delay in shifting the women vendors to the permanent structure due to some incomplete works like black topping and washroom construction followed by the state-wide lockdown due to COVID-19 pandemic.
He appealed to the women vendors of Senapati to come and occupy their allotted seats.
The KSTC president also urged the vendors to follow the rules and regulations given by KSTC while adding that the committee has resolved to give no room for any Government employees, and only daily wage earners could avail the facility.
The women vendors have been asked to shift their wares and commodities to Apfii Saliki within this week as the temporary tent market sheds would be removed, he added.
A Kapani expressed his gratitude to the BJP led Government under the leadership of Chief Minister N Biren Singh for constructing the market under '1 time Special Assistance of Central Grant Scheme, 2017-18'.
The caretaker chairman also announced to issue separate garbage tippers for women by October or November.
Later, Rev K Daniel, president Senapati Karong Area Baptist Union (SKABU) blessed the programme.
Around 300 women vendors are stated to be accommodated in the Apfii Saliki.