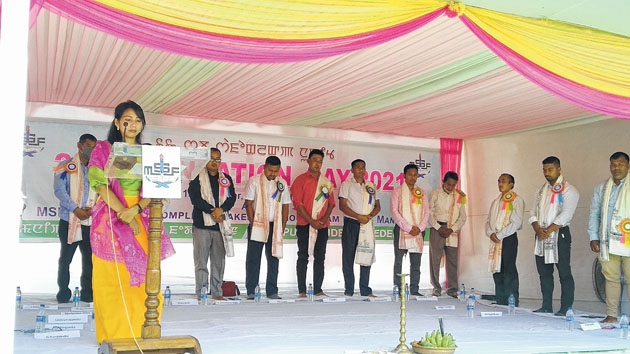 By Our Staff Reporter
IMPHAL, Oct 13: The 23rd foundation day of Manipuri Students' Federation (MSF) was observed today at its head office in Kwakeithel Thounaojam Leikai.
The observation was kicked off by raising the MSF flag and paying floral tribute to the late members of MSF. A blood donation camp was also held and a souvenir was released today.
Speaking at the event, Khangembam Bidyasagar Singh, president of MSF said the federation was formed on October 13, 1088 at GP Women College and it has been playing an important role in various issues of the State since its inception.
MSF will inspect all the schools when normal physical classes resume and will take up strict action against any school found defying the criterions set by the Board of Secondary Education Manipur and Council of Higher Secondary Education Manipur, he added.
Kh Bidyasagar appealed to all the intending candidates, their workers and the public to take all necessary precautions as the COVID-19 pandemic is far from over and election related gatherings have been becoming frequent during the last couple of weeks.
The programme was also attended by presidential committee member Th Udoi Luwang; T Parijaat; Pheirojam Nando Luwang; Sorokhaibam Sanjoy Singh; Md Atabuddin; Ngariyanbam Milan, advisor MSF; Kh Serjauddin; Longjam Umakanda; Md Sazad Bhuiya, former MSF president and O Ashinikumar Singh, advisor MSF as presidium members.