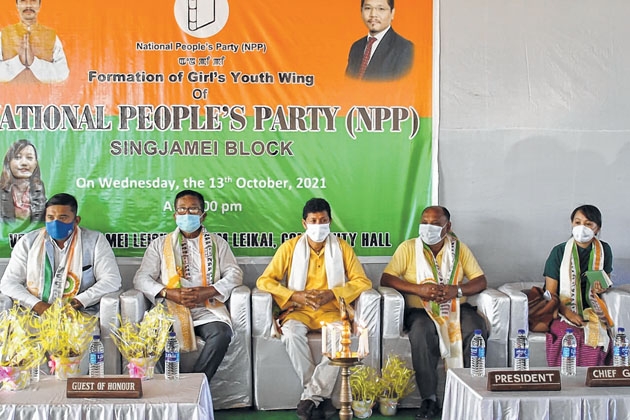 By Our Staff Reporter
IMPHAL, Oct 13: The Girls' Youth Wing of NPP, Singjamei Block was formed today at Singjamei Leishangthem Leikai Community hall.
The inaugural programme was attended by Oinam Romen, intending candidate in the upcoming 12th Manipur Legislative Assembly election; Ratika Yumna, National youth president and Laitonjam Jayananda, president Manipur Youth's Wing.
Speaking at the programme, Nivarani Thongam, president, Singjamei Girls' Youth Wing, said the Girls' Youth Wing was formed with the strong intent to make the girls and women of the State and Singjamei AC in particular to give awareness about the need for conscience voting/voting free from any fear or coercion in the upcoming election. She added that she had joined NPP on the belief that NPP is the only party that will uphold the interest of the people of North Eastern States of the Country and work for the betterment of the NER.
She also added that the newly formed Girls' Youth Wing will not asked the public to vote for O Romen or any intending candidate of NPP, but they will spread awareness about the need to exercise the voting rights by everyone freely without any fear.
While condemning the recent pre-poll violence at Singjamei AC, she said suppression of citizen's voices is not the right approach in a democratic election.
Nivarani added that the NPP has a very bright future in the North East Region as they understand the rights and sentiments of people of the region.