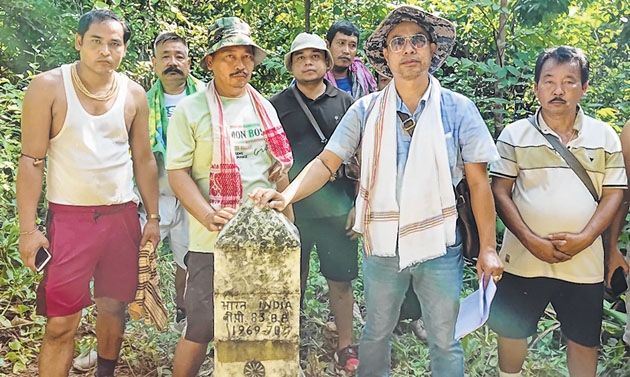 By Our Staff Reporter
IMPHAL, Oct 13 : The present Indo-Myanmar Border Pillar 82 and 83 cannot be taken as the legitimate BPs as there are telltale signs that they have been moved from their original sites.
United Committee Manipur president Joy-chandra Konthoujam said this after visiting the said sites along with a media team on October 11 and 12 and said there were signs of the traditional pillar marked on a 'Khek-U' tree burnt and destroyed.
Chairman of Nongkam Satang Village Authority TK Kothil tried to resurrect the pillar at the site of the burnt 'Khel-U' tree, but the Myanmar army had allegedly used force to deter him from doing the same.
The villagers also claimed that BP 82, which earlier used to be at the foothill, had been moved 500 metres towards India and now is at the top of the hill.
Reporting the findings of the team, Joychandra Konthoujam said even before the issue of BP 79 to BP 81 is solved, the issue of BP 82 has now surfaced. As per the agreement reached between India and Myanmar on March 10, 1967, traditional boundary lines are to be followed in demarcating the boundary between the two Nations and there was already provision that BP 82 should be at the foothills.
However, the team found the BP 82 too has been moved 500 metres towards India, which will further impact upto BP 94. The  issues have crept up because stakeholders including villagers were not consulted while erecting the BPs as only a team of 12 Assam Rifles were used in the process, he alleged.
Joychandra said it was very unfortunate that the Government of India and the State Government have remained silent spectators on issues relating to the Indo-Myanmar boundary. The initiatives taken up by the villagers on the border to protect the BPs are the only existing force that is protecting the boundary, he added.
MoS RK Ranjan had earlier given assurance that he will inspect the contentious sites along the Indo-Myanmar border with officials from departments concerned before the end of this month.