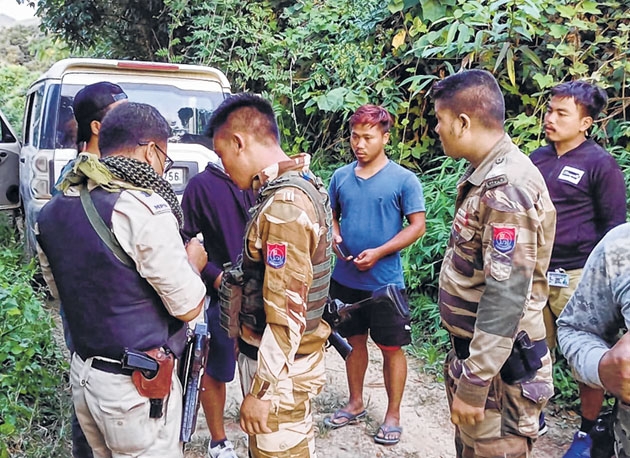 Our Correspondent
KANGPOKPI, Oct 13 : The Kuki National Front (Nehlun group), a non SoO outfit, has squarely blamed the civil society organisations of Phailengmol (Island Block) area of B Gamnom for the carnage at the village which left at least three dead and others injured.
The information and publicity secretary of the outfit, Gou alias Kuki said that KNF (N) had asked the civil society organisations to refrain from conducting the funeral programme of the KNLA cadres who were reportedly killed in an encounter with the security force on October 10.
However in utter defiance of the instruction of the outfit, the funeral programme was held, it said and added that while the funeral service was on, some cadres of KNF (N) had gone there to stop the same.
However suspected cadres of KNLA opened fire on the KNF (N) cadres, alleged Gou and added that in the subsequent exchange of gun fire, the shots from the KNLA hit some of the innocent people, including children.
KNF (N) expressed regret over the incident and expressed solidarity with the family members of the deceased persons and at the same time accused the civil bodies of Phailengmol (Island Block) of letting such a situation come to pass.
Pointing fingers at KNLA, Gou said that it is a gang party that has set its foot at Phailengmol to harass, loot and extort from the people of the area.
As such KNF (N) has been trying hard to drive away KNLA from Phaileng-mol area for some time now.
On October 12, as news of the incident spread, Chief Minister N Biren had said  that his Government would not remain silent and dubbed the act as terrorism. Stating that such acts of terrorism will not be tolerated at any cost, the Chief Minister had said that he had asked the highest level of the State police to ensure that the villagers are not put to further harm.
Top ranking officers of the Army, Assam Rifles and the State police have been asked to take up all possible action against the perpetrators of the crime, the Chief Minister had said. The authority concerned has also been asked to do whatever is needed to save the life of the young boy who was injured in the terrorist attack, the Chief Minister had added. s