TSE owner reaches out with no corruption call, again 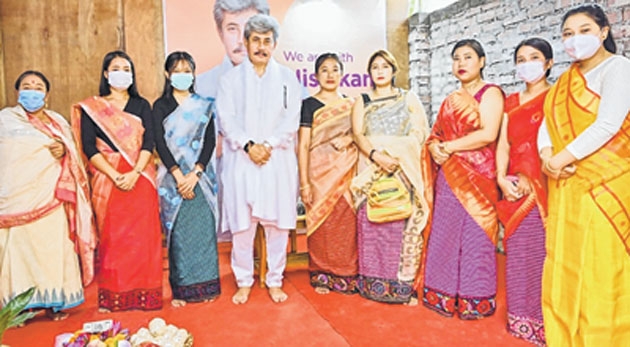 By Our Staff Reporter
IMPHAL, Oct 29 :  Owner of The Sangai Express Nishikant Singh Sapam has urged everyone to shun poll related violence of any form.
Speaking to the media after opening eight  new offices of Team Nishikant at Keishamthong Irom Pukhri Mapal yesterday, the intending candidate for the 12th Assembly election from Keishamthong Constituency said that people who are vying to become lawmakers and their supporters should not misbehave and breach the law of the land.
Reiterating that he entered electoral politics with a conviction to bring about a change in Manipur and not for power, he expressed his desire to script a new chapter in the history of Manipur politics.
Stating that he is against corruption of any form, Nishikant reassured that he would not try to get back the money spent on electioneering.
"I also would not interfere in any contract work and transfer and posting of Government  employees," he said and added, "Let the deserving people get the contract works."
Nishikant then asserted that he would gladly accept any punishment given by the people if the promises are disregarded after winning the election.
Stating that many are speaking ill of the assurance he has given, Nishikant added that he however, is confident of winning the election irrespective of all the blabbers.
"My first priority will be on providing drinking water to every household and infrastructure development in Keishamthong AC after election," Nishikant said and continued that he would also keep the Local Area Development Fund transparent, apart from depositing his salary to it.
Maintaining that necessary steps will also be taken up to make sure the people are benefited by the Government schemes and every grain of rice reach the beneficiaries, Nishikant added that he would emphasize on infrastructure development, tourism and Act East Policy if he luckily becomes a part of the Government.
The programme held at Keishamthong Irom Pukhri Mapal was presided by senior citizen L Jatra.