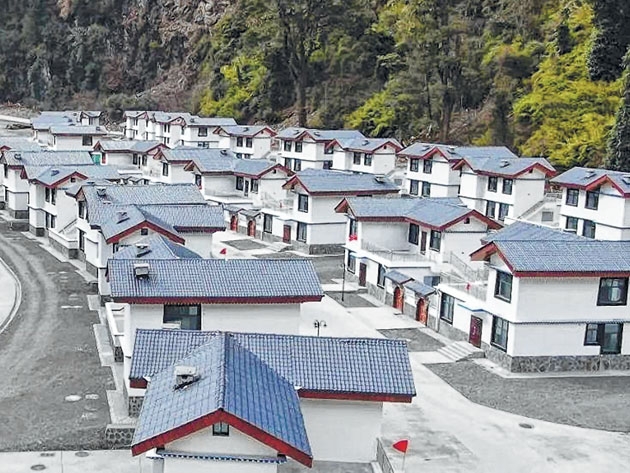 New Delhi, Nov 11
India has taken strong note of a Pentagon report that refers to a 100-home Chinese village in Arunachal Pradesh, first reported by NDTV.
"China has undertaken construction activities in the past several years along the border areas, including in the areas that it has illegally occupied over decades. India has neither accepted such illegal occupation of our territory nor has it accepted the unjustified Chinese claims," Foreign Ministry spokesperson Arindam Bagchi said today.
He added that the Government has always con- veyed and would continue to convey this to Beijing.
NDTV had first reported on a Chinese village built on Indian territory illegally occupied by China.
The annual United States Department of Defence report on military develop- ments referred to this village while detailing the US perception of tension between the two countries along the Line of Actual Control or LAC.
In January, NDTV had given details of the presence of this new Chinese village squarely within Indian territory, south of the McMahon line, based on high-resolution satellite imagery of the area.
In a chapter on the China-India border standoff, the US Department of Defence says, "Sometime in 2020, the PRC (People's Republic of China) built a large 100-home civilian village inside disputed territory between the PRC's Tibet Autonomous Region and India's Arunachal Pradesh State in the eastern sector of the LAC."
The report says, "These and other infrastructure development efforts along the India-China border have been a source  of consternation in the Indian government and media."
The village is located on the banks of the River Tsari Chu, and lies in the Upper Subansiri district of Arunachal Pradesh, an area which has seen clashes between India and Chinese soldiers even before the 1962 war.
While China has maintained a small military outpost in the area for more than a decade, the situation changed drastically in 2020, when it constructed a full-fledged village and stepped up road construction on Indian territory.
The US Department of Defence report says, "Despite the ongoing diplomatic and military dialogues to reduce border tensions, the PRC has continued taking incremental and tactical actions to press its claims at the LAC."
China's policy of building up habitations along the Line of Actual Control in Sikkim and Arunachal Pradesh is a part of a multi-billion dollar plan to ramp up infrastructure in the Tibet region. This includes the development of massive road and rail infrastructure to border towns and a plan to reportedly build more than 600 fully developed villages in the region. NDTV