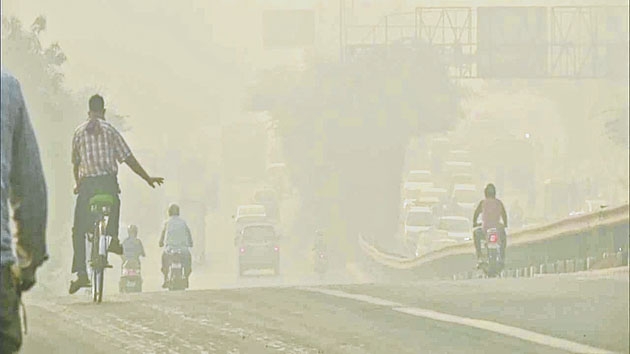 NEW DELHI, Nov 15
Delhi Government today informed the  Supreme Court that it is ready to impose a complete lockdown in Delhi to control air pollution.
The Delhi Government suggested to the apex Court that it would be meaningful if lockdown is implemented across the NCR areas in neighboring States.
"GNCTD (Government of National Capital Territory of Delhi) is ready to take steps like complete lockdown to control the local emissions. However, such a step would be meaningful if it is implemented across the NCR areas in neighbouring States. Given Delhi's compact size, a lockdown would have limited impact on the air quality regime.
"This issue would need to be addressed at the level of airshed involving NCR areas. In view of the above, we are ready to consider this step if the same is mandated for the entire NCR areas by the Government of India or by the Commission for Air Quality Management in National Capital Region and adjoining areas," an affidavit filed by the Delhi Government said.
The affidavit was submitted in response to a plea filed by environmental activist Aditya Dubey and law student Aman Banka, who sought directions to provide stubble-removing machines to small and marginal farmers for free.
Meanwhile, Delhi's air quality remained in the 'very poor' category for the second consecutive day on Monday, with the AQI being recorded at 342.
The air quality index of Ghaziabad, Greater Noida, Gurgaon and Noida stood at 328, 340, 326 and 328 respectively at 9.05 am.
A visible improvement in Delhi's air quality was recorded on Sunday although it was in the 'very poor' category.
The national capital recorded a 24-hour average air quality index (AQI) of 330 on Sunday as against 473 the previous day as emissions from farm fires in Haryana and Punjab dropped significantly.
An AQI between zero and 50 is considered 'good', 51 and 100 'satisfactory', 101 and 200 'moderate', 201 and 300 'poor', 301 and 400 'very poor', and 401 and 500 'severe'.
Also, Delhi Environment Minister Gopal Rai on Sunday said his department has issued a notification for effective implementation of the emergency measures announced by the city government to tackle air pollution.
He also said the Aam Aadmi Party (AAP) government will submit a proposal on clamping a lockdown in view of the rising air pollution in the national capital and its modalities to the Supreme Court on Monday.
Rai said all schools, libraries and institutions will remain shut till November 20, except those where exams are being conducted. Construction and demolition activities will be banned till November 17.
"In the order issued on late Saturday night by the department, we have clarified that those schools or educational institutions where exams are already being conducted will remain open. All other educational institutions will be closed till November 20," the minister told reporters at a press conference.
The notification issued by the environment secretary of the Delhi government said all construction activities will be closed in the city till November 17 with immediate effect.
It said all offices of the Delhi government, autonomous bodies and corporations will remain closed till November 17, except those involved in emergency services such as health and family welfare, medical establishments, police, the environment department, the public works department and the fire department, among others.
"The government employees of all departments except those involved in emergency services will work from home till November 17. We have issued an advisory to private firms to allow work from home for their employees as well," Rai said. Livemint