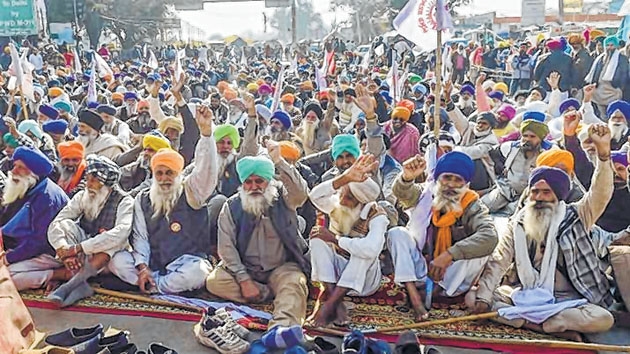 NEW DELHI, Nov 19
Prime Minister Narendra Modi on Friday announced the repeal of three conten-tious farm laws, assuring farmer groups protesting against them for the past year that the legislative process for the repeal would be completed in the upcoming winter session of Parliament.
Mr Modi also announced the formation of a committee with representatives from both Central and State Governments to look into issues related to agriculture, such as zero budget farming, fertilizers, change in crop patterns, transparency in establishing Minimum Support Prices and so on.
Farmers were seen cheering after Prime Minister Narendra Modi's announcement to repeal the three farm laws, at Singhu border on Friday, November 19, 2021.
Addressing the Nation in a television broadcast, the Prime Minister said his Government’s intentions in bringing in these laws was to provide alternatives to small farmers, who constituted 80 per cent of farmers in India, for access to markets and good prices for their crops.
“I apologise to you, my countrymen, that despite my Government’s good intentions, there may have been some lack in our Tapasya (penance) that we could not convince some of our farmer brothers of the intentions of these laws which were as pure as the light from a lamp,” he said, while announcing the repeal.
“Earlier Governments too had considered such measures and we consulted a range of stakeholders and experts before bringing in these laws. Many farmers were happy with the reforms and we are grateful to them. We could not explain to some farmers despite our efforts. Agricultural economists, scientists and progressive farmers also tried their best to make them understand the importance of agricultural laws,” he noted.
“Even though this section was not a huge part of the larger category of farmers, it was important for us that we convince them. We tried engaging them in dialogue, we listened to their arguments and the logic that they put forward, we agreed to suspend the implementation of these laws for two years, and the matter has also been put before the Supreme Court. Particular sections of the laws that they objected to were also removed, but may be there was something lacking somewhere that we were not able to convince this section of farmers,” said Mr Modi, explaining the background to the decision taken by his Government.
“On this auspicious day of Gurpurab (birth anniversary of Guru Nanak), I appeal to all farmers who are protesting to return home in good spirits,” he said.
The announcement of the repeal  of the laws comes in the backdrop of Assembly polls in Uttar Pradesh and Punjab, where the protests have had some traction.
Mr Modi peppered his speech with mentions of all pro-farmer initiatives undertaken by his Government, including crop insurance, payment of income support to small farmers (Pradhan Mantri Kisan Samman Nidhi) and neem-coated urea. He ended his speech invoking Guru Nanak’s prayer that enjoined never fearing to do the right thing. “Whatever I did, it was for the benefit of farmers and I shall continue to do so,” he said. The Hindu