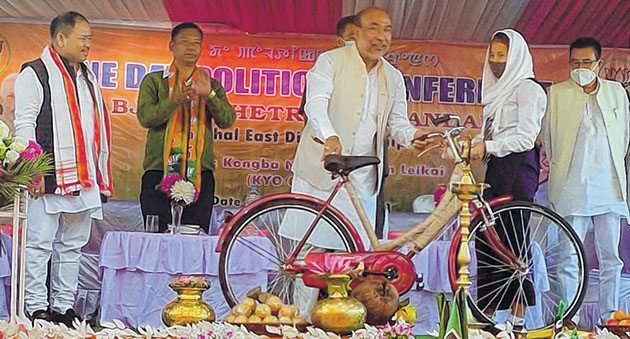 By Our Staff Reporter
IMPHAL, Nov 21 : Chief Minister N Biren Singh has asserted that the people of Manipur can now sleep  in peace as they have given their mandate to the Bha-ratiya Janata Party in the 2017 Assembly election.
Addressing a one day BJP political conference held today at Kongba Nongthombam Leikai, the Chief Minister also claimed that fear gripped the people of Manipur  before the BJP- led Government was form-ed with clanging of electric posts and mothers waiting for their children in groups seen as regular features.
He also urged the people not to take the 2022 election lightly as Manipur is in a critical situation with NSCN-IM resuming its peace talk and many Kuki outfits entering into negotiation with the Union of India.
Saying the Government at the Centre is starting to build a healthier India by amending regulations, if needed , N Biren appealed to all to cast their votes wisely.
It was BJP that extended the Inner Line Permit System in Manipur and renamed Mount Harriet at Andaman &  Nicobar Islands as Mt Manipur, he reminded and urged the people to support the saffron party in the 2022 Assembly election to save Manipur.
Saying that politics is not for everyone and the people could not be wooed by money power, Biren added that   politicians are supposed to safeguard their land, not sell them.
Claiming that a few MLAs from the hill districts have been creating 'issues' as their chances of winning the election is literally low, the CM urged all the politicians to do politics on the genuine, common issues of the State.
"We are all one irrespective of caste, creed or religion," he said and added that those who think of disintegrating could never build a healthy Manipur.
BJP doesn't differentiate people and it would surely return to power, N Biren said and that the commitment of the State Government could also be seen in managing the Covid pandemic. Now there are oxygen plants in all the hill districts of Manipur and a Covid Hospital has been established at Keirao, he maintained.
The State Government has also provided loans to over 5000 youths under Startup Programme, Biren stated.
What the State has achieved in the last four years and a half is just a beginning, the CM said and expressed desire to uplift Manipur to greater heights.
BJP State unit president A Sharda Devi,  Education Minister S Rajen, Agriculture Minister O Lukhoi, MLAs - L Susindro and N Indrajit also attended the programme.