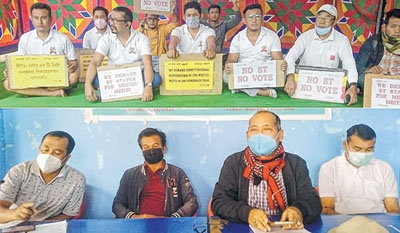 By Our Staff Reporter
IMPHAL, Nov 21 : The World Meetei Council (WMC) has cautioned of imposing 72 hours general strike from November 25 if the State Government fails to send the ethnography and socio-economic reports of the Meetei for inclusion in the Scheduled Tribe list to the Centre.
On the other hand, protest demonstrations were staged at Khurai under the aegis of the Scheduled Tribe Demand Committee Mani-pur (STDCM) urging the State Government to send a recommendation to the Central Government for inclusion of Meitei/Meetei in the Scheduled Tribes list.
Speaking to media persons during a press con- ference of 16 CSOs at Mani-pur Press Club today, WMC chairman Heigrujam Naba-shyam stated that the movement to include Meetei in the ST list of the  Constitution was launched by Schedule Tribe Demand Committee Manipur in 2012.
Saying that the Centre had asked the State Government to send ethnography and socio-economic report of Meitei/Meetei community in 2013, Nabashyam claimed  that the State Government, however, is denying the Meetei of its legal and natural rights by not sending the report till date.
Continuing that the Meetei can settle in the valley area which constitutes only nine percent of the total geographical area of Manipur, Nabhashyam reminded that the Meetei is also a native indigenous community of Manipur.
As per the available statistical data and the rate of unchecked influx of illegal immigrants into the State, the Meeteis could become extinct in a few decades, he said and appealed to Chief Minister N Biren Singh to send the report before November 24.
The WMC along with the like minded CSOs will continue protesting until justice is delivered to the Meeteis, he added.
Meanwhile, sit -in protests were staged at Khurai Sajor Leikai and Khurai Lairikyengbam Leikai endorsing the movement of the Schedule Tribe Demand Committee, Manipur (STDCM) to grant ST tag to Meetei/Meitei.
The protesters at  Khurai Sajor Leikai urged the State Government to send the necessary recommendation for granting ST status to the Meetei at the earliest.
Speaking to media persons, Unity Khurai joint secretary Biken Yaikhom claimed that Meetei was included in the Scheduled Tribe list of the Indian Constitution at one time but deleted from the list due to some misunderstanding .
Saying that the population of Meetei/Meitei is shrinking at an alarming rate, he added that the Meeteis are also not allowed  to purchase land in hill areas as per MLR Act 1960 but the  hill people can settle in any part of the State.
The protest demonstration at Khurai Lairikyengbam Leikai displayed banners such as "No ST, no vote", "Send the recommendation for granting ST tag to Meetei '', "We Demand  ST status for Meetei" etc.