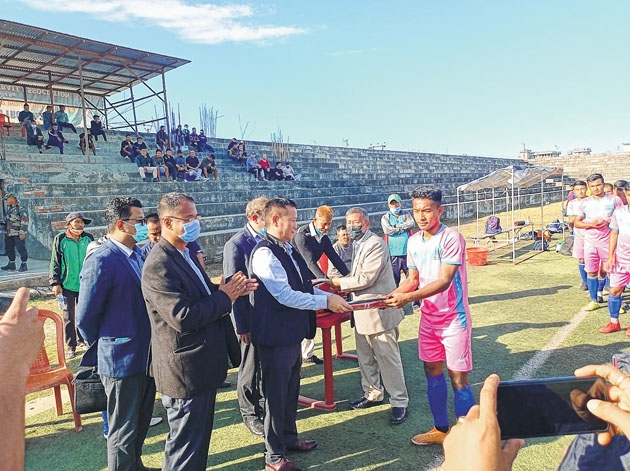 IMPHAL, Nov 20 (DIPR):
Youth Affairs and Sports (YAS) Minister Shri Letpao Haokip today distributed uniforms to the players of the State who will represent the State in the Santosh Trophy. Two sets of uniform which was sponsored by VECTOR was handed over to each players by the minister and other top officials of YAS at the Artificial Turf Ground at Lamlong Thongkhong.
Principal Secretary (YAS), Shri SS Chhabra, Director (YAS), Shri T. Phulen, AMFA Secretary, Shri L. Jyotirmoy Roy and others were also present in the distribution function.
Later, a friendly warming match was played between the Santosh Trophy team and the Kuki Sporting Club (KSC). The Santosh Trophy team of the Manipur will first participate at the NE zone.
Qualifying for the 75 th Hero National Football Championship for Santosh Trophy which will be held at Khuman Lampak , Imphal on November 28.