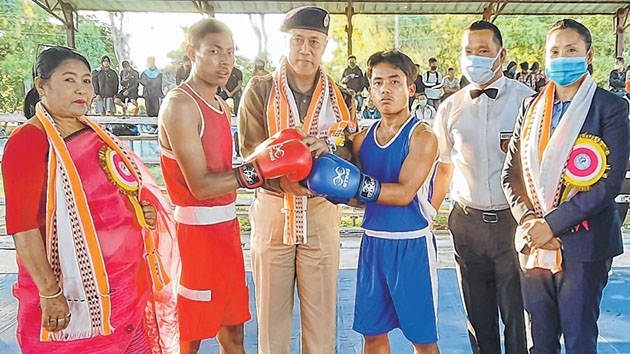 By Our Sports Reporter
IMPHAL, Nov 22 : The 31st edition of Elite Men and Women Boxing Championship which is a part of the State Level Boxing Championship 2021 organised by the Manipur Amateur Boxing Association kick-started here at Khuman Lampak Sports Complex today.
The inaugural function of the championship was graced by P Doungel, DG (Prisons); Khoibi Salam, ex-vice president Boxing Federation of India; L Surmila Devi and L Sarita Devi, Member National Sports Award Committee as dignitaries.
In his speech as the chief guest, P Doungel stressed on the role of parents towards careful nurturing of sports talents. Maintaining that an athlete can be successful only when he or she strictly remains adhered to respective sports discipline and its stipulated rules and guidelines, he said no athlete should use banned drugs or substances or indulge in any unfair means to achieve success.
He also dwelled on the role of sportsperson in making a healthy and strong Nation at the occasion.
In all, 173 male and 96 female athletes from district units of Bishnupur, Chandel, Churachandpur, Imphal West, Imphal East, Kakching, Kangpokpi, MPSC, Senapati, Tengnoupal, Thoubal and Ukhrul will be competing for top honours in different weight categories of sub-junior, junior, youth and elite age groups.
The first day of the elite men's championship witnessed Nongthombam Amarjit of Bishnupur box his way into the semi-finals beating Seilenmang of Churachandpur 5-0 in a quarter final clash for elite men's 54 kg category.
In the meantime, Ukhrul's J Thotreimu and Thoubal's Julet Singh made their way to the semi-finals of the same weight categories without breaking a sweat as they enjoyed a walk over against their respective rivals before Kishan Singh of Kakching downed Imphal West's Chirom Tiger  5-0 to complete the semi-final line up.
The semi-final line up of the elite men's 57 kg category also completed today with Chingakham Kirankumar of Imphal East edging out Tajuddin of Kakching on split decision, Imphal West's Gurudatta getting a walkover against Ningthoujam Borish of Bishnupur and Thoubal's Laishram Vishal getting a walkover against Thang Goulun of Churachandpur.
In a Junior Girls 46 kg category quarter final bout, Elangbam Thoicha Devi of Thoubal beat Easter Neiping of Churachandpur 5-0 to enter the semi-finals.
Earlier, Laishom Phonia Devi of Imphal East got a walkover against Thiyam Apsara of Bishnupur  and earned a place in the semi-finals. Kimhoinei Telei Kom of Kangpokpi too earned a place in the semi-finals beating IW's Ngangkham Dolly in the second round.