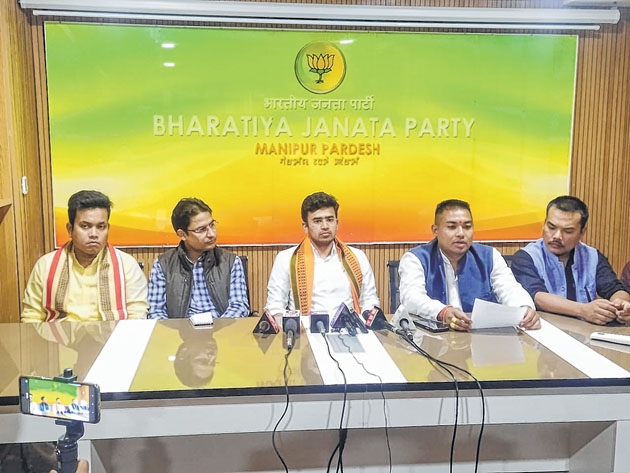 By Our Staff Reporter
IMPHAL, Nov 22: Bhara-tiya Janata Yuva Morcha (BJYM) National president Tejasvi Surya has catego-rically stated that BJYM would play a key role in ensuring that BJP wins ab-solute majority in the Manipur Legislative Assembly election which is due early next year and BJP retains power in the State.
Speaking to media persons at the Nityaipat Chu- thek office of BJP Manipur Pradesh, Tejasvi Surya, who arrived here on his maiden visit to the State, told media persons that he would invest all efforts to chalk out an effective strategy for BJP’s youth wing (BJYM) so that BJP wins absolute majority in the State Assembly election and forms the next Government.
The team led by Tejasvi Surya was accorded a warm reception at Sega Road, Thouda Bhabok Leikai by enthusiastic members of Team Nishikant at around 11.30 am today soon after they drove out from Imphal airport.
Saying that the forthcoming elections are very crucial from BJP’s point of view, Tejasvi Surya remarked that the entire North    East region which is characterised by breathtaking natural beauty has been making rapid strides on the path of development.
“There was a misunderstanding and a sense of division among ourselves for a very long period after India achieved independence, and as a result, the North East region was neglected for many years”, the BJYM National president said.
But today all the tribal communities of the country have united under the leadership of Prime Minister Narendra and this unity has further strengthened the integrity of India, Tejasvi Surya said.
Among all the Prime Ministers of the country, it is Narendra Modi who has visited the North East region for the maximum number. There is no other Prime Minister in the history of independent India who visited the North East region as many times as Narendra Modi, he asserted.
In addition, he has been sending Union Cabinet Ministers and Ministers of State to the North East region on weekly/monthly basis with the primary objective expediting development in the region, he continued.
Subsequent upon installation of the Modi Govern- ment, that gap that existed between the people of North East region and other regions of the country has been bridged. Now there is no division like Delhi and the North East region. All the States and regions are now able to march together on a new trajectory of development, Tejasvi said.
Even though Manipur was once known for frequent bandhs and block- ades, installation of BJP Governments at the Centre and the State had resolved these once chronic problems and Manipur has wit- nessed remarkable changes in different sectors, said the BJYM National president.
As the BJP Government has successfully restored peace in the State, the hill people and the valley people are now marching together, he said.
Noting that Manipuri youth are highly talented in different fields, Tejasvi Surya remarked that the people of Manipur are quite magnanimous and compassionate even though the State is very small.
As a result of the myriad development projects being implemented by the double-engine of Prime Minister Narendra Modi and Chief Minister N Biren, there is peace and stability in Manipur, he continued.
He then appealed to all the people of Manipur to ensure BJP scores a landslide victory in the coming State Assembly election so that BJP retains power and Manipur achieves a higher trajectory of development. BJYM State unit president M Barish said that the Central team led by the BJYM National president came to Imphal on a two-day visit to spur Yuva Morcha workers of the State ahead of the Assembly election. During their visit to the State, all attempts would be made to chalk out a strategy and define the roles of BJYM for the forthcoming election, Barish said.  After landing at Imphal, the team led by Tejasvi Surya played a football match at Patsoi with a team led by Chief Minister N Biren.
Tejasvi Surya would pay a visit to the INA Memorial Complex, Moirang tomorrow and he would take part in a bike rally which would start from Moirang and wind up at Imphal. He would leave Imphal for Delhi after attending a public function at the City Convention Centre tomorrow.