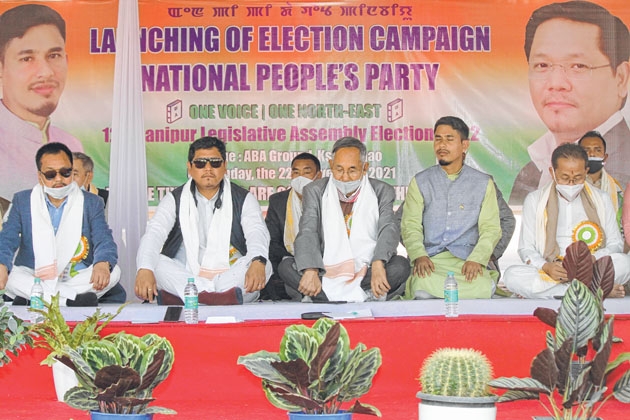 By Our Staff Reporter
IMPHAL, Nov 22 : Megh-alaya Chief Minister Conrad K Sangma has stated that  the National People's Party (NPP) would emerge as the single largest party in the 12th Manipur Legislative  Assembly election and go on to form the next Government.
`Notably, Conrad Sang-ma is the National president of NPP.
Addressing a campaign for the 2022 elections at Kshetri Mayai Leikai under Kshetrigao Constituency today, Conrad Sangma continued that NPP is one among the eight political parties  which have been identified as National political party in India.
Saying that NPP is the only political party which works in the interest of the North East people, Conrad Sangma claimed that  other parties don't recognise the genuine problem of the region.
Promoting the identity of every indigenous community of the region is also  the topmost priority of the NPP, the Meghalaya Chief Minister said and reminded that it was the NPP that voiced its opposition to the Citizenship Amendment Bill at the Parliament in the first place.
After paying attention to the Opposition  which was spearheaded by the NPP, the Central Government gave room for negotiation and incorporated many provisions in the Act (CAA) to keep the identity of the region intact, he claimed.
Continuing that the NPP will always work for the development of the North East, Conrad Sangma appealed to the people of Manipur to extend support in strengthening the NPP.
Conrad K Sangma also exuded confidence that Sheikh Noorul Hassan, who is young and dynamic, would surely win the 2022  election in Kshetrigao AC.
Noorul Hassan is the general secretary (organisation)  of NPP, Manipur.
He also assured that the NPP would incorporate an agenda to save the indigenous people of Manipur in its election manifesto.
Later, the NPP chief attended an election campaign of Huidrom Vikramjit who would be contesting the Assembly election from Yaiskul AC on NPP ticket at OLA  ground, Wangkhei Kongba. There, Conrad Sangma pointed out the discrimination being faced by the people of  the region at other parts of the country. Strengthening the region politically is indispensable to overcome such unfairness, he said and added that NPP was formed to  straighten the political system of the North East region. The Meghalaya Chief Minister also stated that the NPP would surely be given an opportunity to fill the political vacuum in Manipur in the ensuing election.
He then urged the electors from Yaiskul AC to support the NPP and H Vikramjit. It is reported that Conrad Sangma who is on a three-day trip to Imphal would attend election rallies tomorrow.
The programmes at Yaiskul and Kshetrigao were attended by Deputy Chief  Minister Y Joykumar, Tadubi AC MLA N Kayisii and several MLAs from Meghalaya.