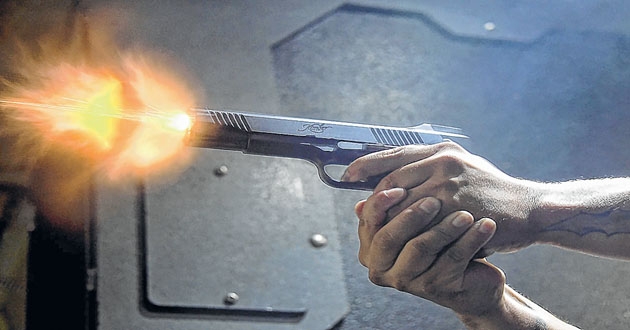 By Our Staff Reporter
IMPHAL, Nov 22 : The Chief Judicial Magistrate, Imphal West has on Monday rejected the final/closure report submitted by the Central Bureau of Investi-gation (CBI) on the alleged fake encounter killing of Jayenta of Kumbi by a combined team of Imphal West commando and Assam Rifles on February 6, 2012 at Phayeng.
The Court also took cognizance against 16 person- nel of the combined team including then Inspector P Sanjoy of Imphal West commando and then Major Vijay Singh Dhanak of 10 Assam Rifle under Section 302 and 34 IPC.
The order was passed today in connection with the petition filed by Waheng-bam Inakhunbi, wife of the deceased currently staying at Takyel Kolom Leikai and Extrajudicial Execution Victims Families Association, Manipur (EEVFAM) against the CBI.
The application prayed for further investigation of the case.
The investigation was carried out as per a directive given by the Supreme Court on July 14, 2017.
A case was registered at Lamshang police station under different Sections of the IPC and Explosive Substance Act on the basis of a complaint lodged by Inspector P Sanjoy of Imphal West commando on February 6, 2012.
As per the complainant, the combined team of Imphal West commando, 10 Assam Rifles and Headquarters 9 Sector rushed to the area (Phayeng) and conducted a frisking and checking drive at the junction of UK Road near Don Bosco School, Phayeng. At about 6.30 pm, two motor cycles were seen coming from Phayeng side but immediately made a U-turn and sped away  on seeing the team .
Saying that the team pursued the two motorcycles, the complainant claimed that one miscreant fired with an automatic weapon at them.
In retaliation, at least one unknown person was killed while the others escaped, he added.
The complainant also mentioned that one bullet ridden dead body was found lying on the roadside along with a pistol of 7.62 mm calibre and one red coloured moped.
After investigation, the CBI submitted a closure report to the Court with a prayer for closing the case.
The Court heard the Special PP of the CBI and also the petitioner's counsel, and on perusal of all the materials on record observed that the post mortem of  W Jayenta Singh was conducted on February 9, 2012.
As per experts, at least seven external injuries were found on the body and subsequently, a team of forensic experts from CFSL visited the location on April 5, 2018 and re-created the Scene of Crime (SOC).
The Court observed that there is a huge contradiction between the claim of the security personnel and the opinion of Forensic Experts, CFSL.
The Court further observed that the deceased, who was riding the two-wheeler, was hit by several bullets as per Forensic Report and as much as 83 rounds were fired by the combined team.
The Court then directed the CBI to further investigate the case.