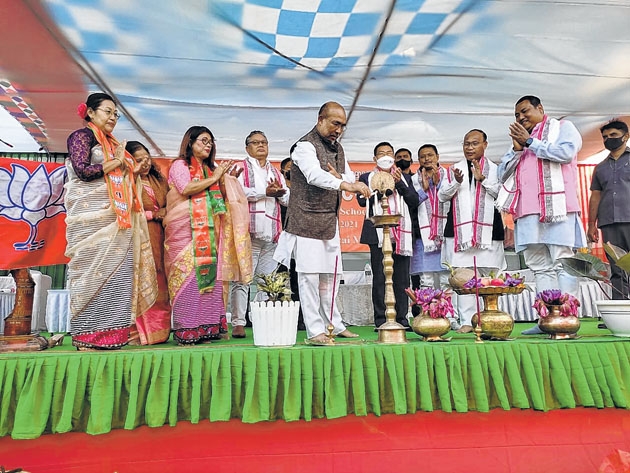 By Our Staff Reporter
IMPHAL, Nov 23: A one day political conference was held at Khurai Popular High School ground today organised by BJP Khurai Mandal.
Speaking as the chief guest of the occasion, Chief Minister N Biren Singh cautioned the people against those intending candidates who wish to buy votes through money power so as to avoid any untoward outcome in future.
Further he appealed to the people to exercise their voting rights wisely and elect eligible candidates who will work earnestly for people's welfare.
He maintained that the standard of living has increased considerably and the issues of the masses have been addressed to a great extent under the abled leadership of Prime Minister Narendra Modi.
The people are able to save their earnings since the major problems like scarcity of food, lack of adequate housing, expensive medical treatments etc have been solved by the incumbent BJP led Government, he added.
The Chief Minister also expressed belief that more than 80 percent of the State's household will receive drinking water supply before the upcoming election which was only 5.7 percent when the BJP Government came into power.
Lauding the earnest efforts of L Susindro, MLA of Khurai Assembly Constituency, the Chief Minister termed him as one of the committed representative of the people who prioritise the well being of the people and appealed the people to re-elect him so that the constituency continue to thrive under his leadership.
Further he sought the support and cooperation from the public to ensure that BJP gets absolute majority in the upcoming State Legislative Assembly election so as to bring in a more peaceful and developed Manipur.
The political conference was also attended by MP of Rajya Sabha, Leishemba Sanajaoba, Agriculture Minister, O Lukhoi, Education Minister, S Rajen, TA & Hills Minister, Vungzagin Valte, BJP National Spokesperson and BJP Manipur in-charge, Sambit Patra, BJP National Executive member, Sumitra, MLA of Langthabal AC, Karam Shyam, MLA of Kshetrigao AC, N Indrajit, MLA of Khurai AC, L Susindro, president of BJP Khurai Mandal, L Kananbala and office bearers of BJP Manipur Pradesh. As a part of the programme, the Chief Minister also released an election manifesto enlisting 32 points about the welfare works to be taken up by L Susindro in Khurai AC if he is re-elected in the upcoming election.