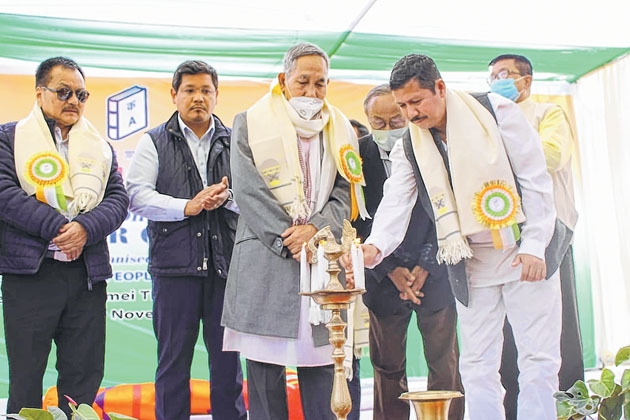 By Our Staff Reporter
IMPHAL, Nov 23: The National People’s Party (NPP) National president Conrad K Sangma has reiterated that NPP is the only political party which can fill the political vacuum in Manipur.
He was speaking as the chief guest in the public meeting of election campaign held at the residence of Karam Nabakishor who would be contesting the Assembly election from Langthabal AC on NPP ticket.
Saying that the people of Manipur have given their mandate and tested the governance of both the Congress and BJP, the Meghalaya Chief Minister added that the people of Manipur want a new party that could cause a change in the State.
He said that the people of Manipur and North East have realized that the NPP is the only political party which always stands for the  people of the North East.
“The party represents the voice of the North East people, particularly the youths and women with a regional outlook that can actually provide an alternative Government in Manipur and the North East”, he added.
Conrad further assured that the party (NPP) will do whatever it takes to bring peace and development in the State.
He also said that the party will give priorities to the youths, women and indigenous people.
Condemning the alleged assault on his party workers recently, the NPP chief said that certain politicians are guiding the youths and people in the wrong direction.
He then urged the youths to engage in positive politics and teach lessons to those candidates and political parties who try to win elections through violence by rejecting them.
Observing that NPP and BJP will have a tough fight in the ensuing election, Conrad further appealed to the public of Langthabal AC to vote for NPP intending candidate Nabakishore. Delivering his speech, NPP intending candidate Karam Nabakishore claimed that Langthabal AC has been lagging far behind from other Constituencies in terms of infrastructure, education, health and agriculture among other sectors. The NPP intending candidate also assured that he will make  Langthabal a leading constituency in Manipur if he is elected. Earlier, Conrad Sangma attended an interaction programme organized by the NPP, Singjamei Block & The National People’s Youth Front at Singjamei Thongam Leikai. He also campaigned for NPP intending candidate from Singjamei AC Oinam Romen.  There, Romen presented a painting related to Manipuri culture to the NPP chief.