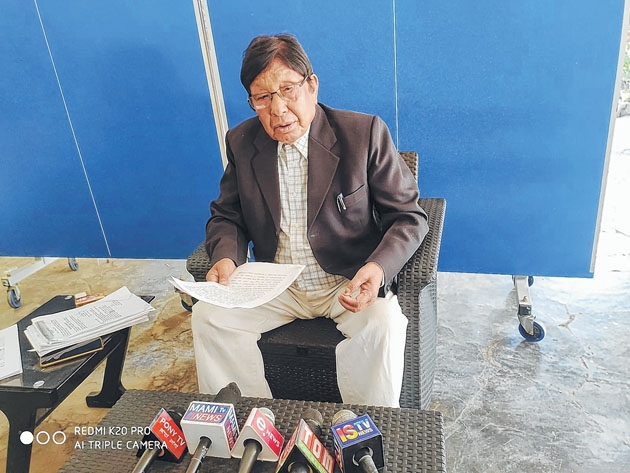 By Our Staff Reporter
IMPHAL, Nov 23 : Veteran politician, Okram Joy has stated that  indulgence in unconstitutional activities in pursuit of something which needs constitutional intervention will only create tensions.
He was speaking to media persons this evening at his residence at Kakwa in the face of demands from various quarters for tabling of "Manipur (Hill Areas) Autonomous District Council Bill, 2021" in the State .
He said that a Law, appropriate and beneficial to tribals of the State, can be promulgated by adhering to rules and guidelines laid under the Constitution of India.
However, adopting unconstitutional approaches for the sake of certain demand will only put a wedge between different communities and disturb peace.
He said that the Manipur (Hill Areas) Autonomous District Council Bill, 2021 is a very sensitive Bill.
It is not only an unconstitutional but also an unofficial and defective Bill, he said.
Explaining why he termed the Bill as unconstitutional, unofficial and defective, O Joy said as per the Presidential order of 1972 issued under Article 371 C the 'Hill Areas Committee' is empowered to only discuss scheduled matters and take resolutions but does not have the power to draft a Bill.
Since the committee (HAC) is a part of the House Committee (Manipur Legislative Assembly), it cannot pass a Bill or enact a Law, he reasoned.
The recruitment and service condition of the Assembly Secretariat is governed by rules laid down under Article 187, he said. As per Article 187, the Speaker and Assembly Secretary is accorded the superintending authority and the responsibility respectively over the administration and control of Assembly Secretariat.
Every Bill, be it financial or administrative, to be tabled for discussion in the Assembly floor is forwarded by the Secretary (Assembly) to the Government with due approval of the Speaker. The proposed Bill (HAC Bill 2021) thus should go through the same procedure and the Chairman of the Hill Areas Committee cannot directly send the same to the Government by bypassing the Secretary, he said.
Further, a Bill should essentially contain its object and reason, delegation of legislation and financial memorandum. If not, the said Bill is said to be defective, he said while adding that the proposed ADC Bill 2021 lacks the said three aspects. Asserting that the flawed Bill can never be passed in the State Assembly, O Joy urged the sections demanding to table  the Bill and pass it should rethink. Unfortunately, the present Government appears to be hiding the Bill, he said. If the Government wants to prepare such a Bill, it should be drafted by the Law Department and passed by the Cabinet before sending for approval to the Governor, he said.
He also expressed the need for intervention of the Governor regarding the matter. The State, since 1974 has seen many Governors and there have been numerous instances where Governors played a crucial role in resolving many issues, he said. Some Governors left their position for failing to come to the terms of the Central Government and some have moved Supreme Court against the whimsical nature of the Central Government, he said while adding that it is regretful that some continue to derelict  discharging their duty when needed most.