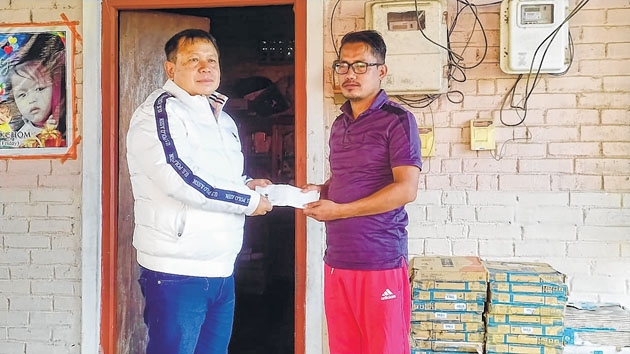 By Our Staff Reporter
IMPHAL, Nov 24: MLA Thangmeiband AC, Kh Joykisan has extended financial assistance to Naharolgi Thoudang correspondent Thokchom Rocky, who is currently receiving treatment after an unfortunate road accident.
Kh Joykisan visited the residence of Thokchom Rocky at Kongpal Kongkham Leikai and handed over the financial assistance personally. Speaking to the media afterwards, Kh Joykisan said the role of media in Manipuri society is commendable. The State has great journalists who are no less than journalists from big media houses in the Country, he added.
The media has been playing an important role in ensuring the people of the State their constitutional and human rights in addition to playing an important role in shaping the development of the State, he added.
The MLA added that he had been extending assistance to media persons during their time of need even before he had ventured in politics and assured that he will continue to do so till the very end.
He also wished Th Rocky a speedy recovery.
It is noteworthy to mention that Th Rocky had met with an accident at Nongmeibung Nambam Chuthek on the evening of November 15 while returning from his work and had been receiving medical attention at JNIMS hospital and had come back home as per advice from the hospital.