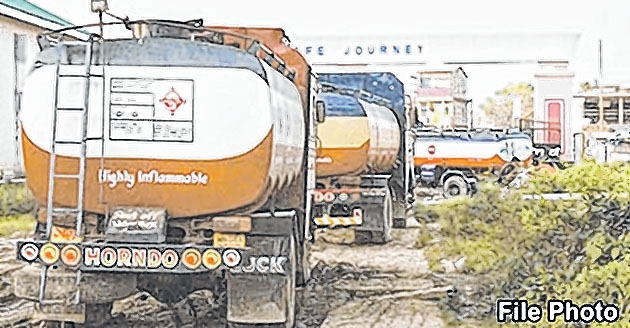 By Our Staff Reporter
IMPHAL, Nov 24: Trans-portation of petrol and petro- leum products into the State has been halted following the economic blockade called by the All Tribal Students Association Manipur over their demand to convene a special Assembly session and discuss the Manipur Hill Areas Autonomous District Council Bill 2021', known as ADC Bill which has been already recommended by the Hill Areas Committee.
It may be noted that prior to the blockade, CRPF convoys used to escort vehicles carrying petrol/petroleum products as they made their way into the State from different loading points in Assam.
However, ever since the imposition of the economic blockade from the midnight of November 22, the convoys have stopped this routine movement.
According to a reliable information received from the Indian Oil Corporation Limited, Imphal Division, the fuel market in the State has witnessed an exponential growth and the demand for petrol and diesel has risen multiple times. As such, the current stockpile would last only thirteen days in case of petrol and twentyfive days for diesel.
Further, the IOC's gas bottling plant located at Sekmai has enough stock to last only nine days. The stock positions of the IOC oil depot at Malom and the gas bottling plant at Sekmai were last  updated yesterday at 5pm. Under normal circumstances, this stock of fuel would have lasted a few days longer.
According to the Indian Oil Corporation Limited, Imphal Division as per the stock position from yesterday evening, there are currently 3971 KL of petrol, 10952 KL of diesel, 1639 KL of SK Oil and 1315 metric tonnes of LPG in stock.