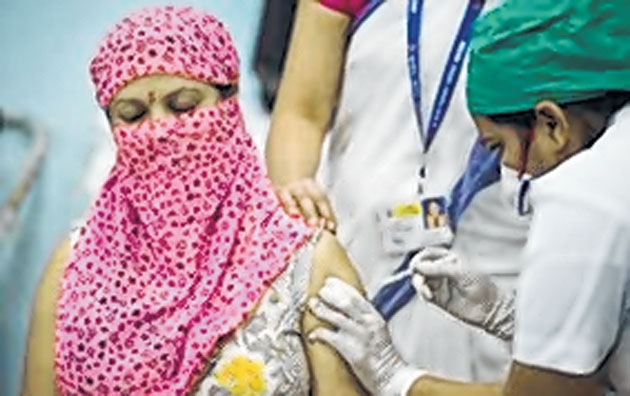 By Our Staff Reporter
IMPHAL, Nov 24: Two more individuals belonging to Imphal West and Bish-nupur districts succumbed to the Covid-19 pandemic during the last 24 hours, pushing the death toll to 1965.
According to a report of the State Level Covid-19 Deaths Audit Committee, both the victims had co-morbidities and none of them were vaccinated.
On the other hand, 39 samples were confirmed Covid-19 positive at JNIMS (6) and other testing centres (33) out of 1,888 samples tested during the last 24 hours which implies posi-tivity rate of 2.1 per cent. This is slightly lower than yesterday's positivity rate which was 2.3 per cent.
Imphal East recorded the highest positivity rate at 5.7 per cent followed by Imphal West 3.5 per cent.
The 39 positive cases belong to Imphal East (14), Imphal West (20), Bishnu-pur (2), Kakching (1), Churachandpur (1) and Ukhrul (1).
Meanwhile, 26 Covid-19 positive people recovered during the last 24 hours and as such, they have been discharged from home isolation (5), RIMS (1), JNIMS (5) and CCCs (15).
A bulletin issued by Additional Director (Health) and Covid-19 Common Control Room spokesman Dr Khoirom Sasheekumar Mangang informed that the cumulative number of positive cases has reached 1,25,046 (general population 1,20,623 and Central security personnel 4,423).
It includes 698 active cases (general population 631 and Central security personnel 67) and 1,22,383 recovered cases (general population 1,18,032 and Central security personnel 4,351).  The recovery rate is 97.87 per cent.
Meanwhile, a total of 594 D-type oxygen cylinders and 126 B-type oxygen cylinders were made available to different health facilities of the State on Tuesday.
The cumulative number of Covid vaccine doses administered in the State has reached 21,17,663 (first dose 12,72,945 and second dose 8,44,718). It includes 5331 doses administered yesterday.
Till yesterday, 54.38 per cent of the State’s total population had been given     the first dose of Covid vaccine while 36.08 per cent had received both the first and second doses.