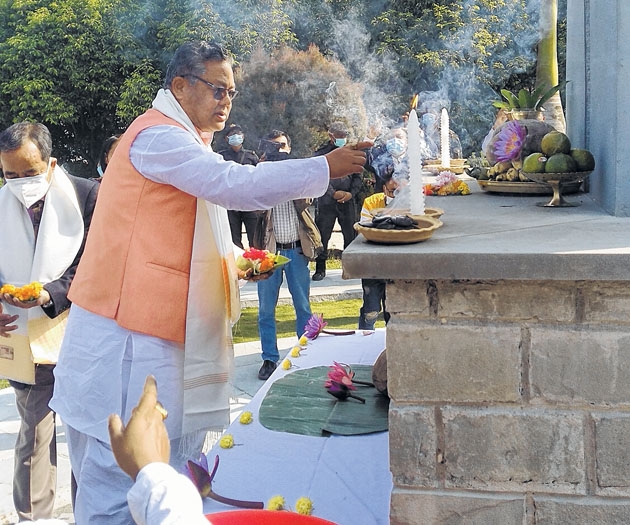 By Our Staff Reporter
IMPHAL, November 23 Langthabal AC MLA Karam Shyam has said that those who were imprisoned in the freedom struggle of Manipur were equally brave as to those who were martyred in the battlefield.
Karam Shyam made the remark while attending the 130th anniversary of heroes deported to Andaman in 1891 organised by United Chongthas at Exiled Heroes of Anglo Manipuri War 1891 at BT Park today.
Floral tributes were paid to the bravehearts and gifts were presented to their families.
A 24 page souvenir was also released at the event.
Speaking at the event, Karam Shyam said that the State remains united even today due to the sacrifice of 'our forefathers.'
He also expressed the need to further research the history of Manipur, adding that history is something which cannot be suppressed for a long time.
Hailing the Centre for renaming of Mt Harriet at Andaman & Nicobar Islands as Mt Manipur, the MLA stated that organising some programmes at Mt Manipur would be useful in tracing the history of Manipur and  our forefathers.
"Contesting elections is not the only way to do social work, we can share all our knowledge and skill for the betterment of the State," he added.
He also appealed to the Government to organise remembrance day for the prisoners of wars who were exiled to Andaman and Nicobar Islands at a State level.
Chongtham Tomba, convenor United Chongthas spoke on the history of Anglo-Manipuri War 1891 and the incidents that followed. He also informed that a book on the exiled heroes will be published very soon.
Khuraijam Athouba, convenor, Justice Committee on Anglo-Manipuri War, said it was very unfortunate that the previous generation or the generation before them did not document or research properly about the forefathers who played a significant role in Anglo-Manipuri War, 1891.
But newer generations who are interested in keeping the history alive have researched and revealed the names of more 'war heroes' whose contribution to the Anglo-Manipuri War are no less significant than the previously known patriots, he added.
It is also not right for us to consider Khongjom War as the only battle of Anglo-Manipuri War as a number of important battles were fought at Mayangthang, Lai Maton, Tengol Lampak, Kangla etc.
The programme was also attended by Prof Ch Priyoranjan Singh, Department of Economics, MU.