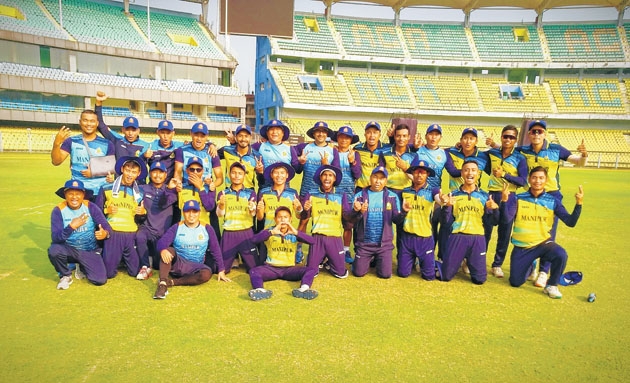 By Our Staff Reporter
IMPHAL, Nov 24 : Manipur cruised to their fourth win (plate group) in the Men's U25 State A Trophy beating Mizoram by 62 runs in a low scoring match at ACA Stadium, Barsapara, Guwahati today.
Manipur which were on a high after three victories, produced a dismal batting performance and bundled out for a paltry total of 135 runs in 37 overs after being put in to bat first.
Manipur bowler Kishan, however proved his mettle by removing 5 wickets alone for 5 runs in 9 overs which contained 7 maidens to wreak havoc across the batting line up of Mizoram and forced them to skittle on a meagre 73 runs after 42 overs in the chase.
For Manipur, Johnson made the most of 25 runs in 30 balls while Andyroshan and Kishan added 19 and 17 runs respectively. Interestingly, Mohammed Mustaque, Denin and Alfred Hmar (not out) scored an identical score of 11 runs in this innings wherein Vanlal Remruata enjoyed a three wicket haul for 26 runs in 10 overs and Lalhriatrenga scalped twice for 43 runs in 8 overs.
Meanwhile in the chase, Sahil Reza (40) was the only Mizoram batter to have scored a double digit run as the remaining order fell easy prey to Manipur bowlers, Kishan (5/6), Denin (2/11) and Bikash Singh (1/9).
With the four wins in five matches, Manipur are second to Assam in the plate group standings and will play Sikkim in the last group stage tie on November 26.