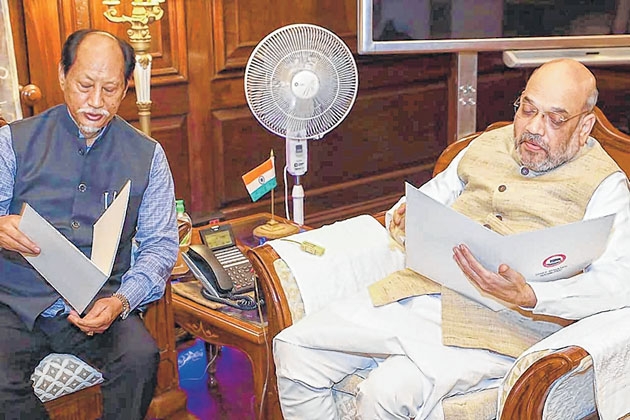 Kohima, Nov 24
The Nagaland Government is going “all-out” to facilitate Naga peace talks, said Chief Minister Neiphiu Rio on Tuesday. He is likely to meet with Union Home Minister Amit Shah after the two-day Nagaland Legislative Assembly session, which begins on Thursday.
While addressing the NDPP party workers in Kohima, Rio said that Shah had called him to visit Delhi to discuss a “few issues”.
Rio informed that Shah had also suggested that Rio pay the visit along with Assam Chief Minister Himanta Biswa Sarma, the North East Democratic Alliance (NEDA) Convenor, as Biswa is “involved” with the Naga political issue.
In this regard, Rio said he hoped for an honourable and acceptable solution.
The Naga political issue is one of the biggest commitments of the Govern- ment, which also led to the formation of an opposition-less Government–United Democratic Alliance (UDA), he said. The Government will make all efforts to facilitate the peace talks, he added.
He said that even if a solution is not brought about, there will be no regret if they make the best efforts to facilitate the process.
During the 4th general convention of the NDPP party at its office in Kohima, the party appreciated the Government of India and all negotiating parties for resuming the ongoing Indo- Naga political talks that had stalled for some time.
Through a resolution, the NDPP reiterated its stands for an early resolution to the decades-old Indo-Naga political issue and had appeal- ed to all the negotiating parties to expedite the ongoing negotiations and bring an early solution that is democratic, honourable, and acceptable to the people.
The NDPP also welcomed the formation of the opposition-less United Democratic Alliance (UDA) in the spirit of encouraging all Naga National Political Groups to unite and bring about a common solution to the Indo-Naga issue, reaffirming its stand as an active facilitator to the ongoing peace process.
The NDPP also called upon all sections of the people to come together under the spirit of unity, brotherhood and oneness to strengthen the ongoing peace talks, so that all stakeholders contribute towards an early conclusion to the negotiations.
“The NDPP continues to support the desire of the Naga people to live as one and reiterate our support for the integration of all the Naga areas under a single administrative unit,” it said. East Mojo