International Day for the Elimination of Violence Against WomenAwareness programme, run to end violence against women held 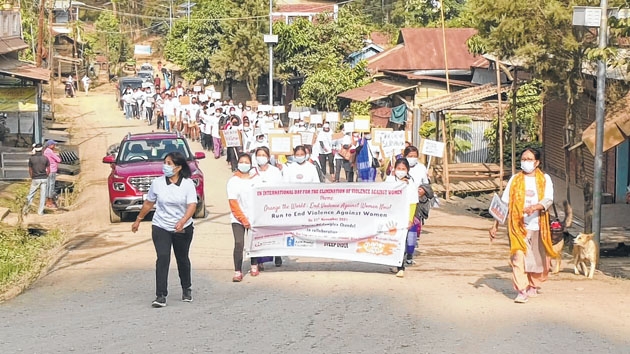 Our Correspondent
CHD/KAK, Nov 25: UN International Day for the Elimination of Violence against Women was observed in the State on Thursday with the goal to spread awareness of the suffering of women.
CHANDEL
Centre for Women and Girls, Lhunajang village, Pallel in association with District Administration Chandel, One Stop Centre Chandel, ICDS Chandel, DLSA Chandel, Wisecrabs Chandel, SVEEP India Chandel, Chandel District Police, Anal Sinnu Ruwl and Widow Welfare Society Chandel observed the UN International Day for Elimination of Violence Against Women at DC Complex Chandel.
The programme conducted with the theme, "Orange the World: End Violence against Women Now" was attended by Centre for Women and Girls secretary Hechin Haokip and  Deputy Commissioner Chandel, Mayanglambam Rajkumar among others.
Later, a memorandum to initiate welfare schemes for the upliftment of women was also submitted to the DC.
As part of the programme organised in collaboration with Azim Premji Foundation, Bangaluru, Karnataka, a run to end violence against women was also flagged off by Mayanglambam Rajkumar frrom DC Complex Chandel.
KAKCHING
In line with the observance of UN International Day for the Elimination of Violence against Women, One Stop Centre, Kakching also conducted an awareness programme for students at Martin Grammar School, Kakching.
The programme was held under the supervision of District Magistrate and Minister of Women and Child Development.
During the programme, Kshetrimayum Sarankumari, Advocate enlightened the gathering on 'Eradication of Violence and Discrimination Against Women'.
While stressing on the need to spread legal awareness, Sarankumari appealed to the public to contact the help-line number 181 or 1098 for assistance or report cases of domestic violence against women and children.
James Naorem, advocate also spoke on 'Gender base violence and its impact on the society.'
Later, an interactive session was also conducted.