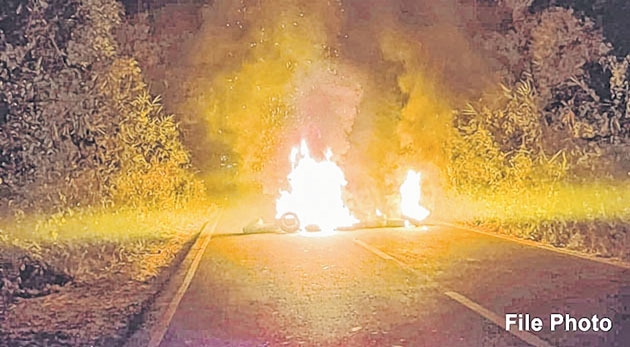 By Our Staff Reporter
IMPHAL, Nov 25: The indefinite economic block-ade called by ATSUM in association with ANSAM and KSO has been suspended temporarily after an agree-ment was made between the State Government and the student bodies.
The agreement was made this evening in the presence of YAS Minister Letpao Haokip, PHE Minister L Dikho and  Tribal Affairs & Hills Minister Vungzagin Valte.
As per the terms of the agreement, there would be a discussion between the Hill Areas Committee (HAC), Manipur Legislative Assembly and the State Government within five days; that is, by November 30 on the draft Autonomous District Council (ADC) Bill 2021.
Thereafter, the draft ADC Bill 2021 shall be introduced by the Government in the upcoming winter session of the State Assembly after completing due process of law provided under the Constitution of India, reads the agreement.
It also said that the Government shall release all the arrested executives of ATSUM, KSO and ANSAM unconditionally and the ongoing economic blockade shall be suspended for the time being.
Earlier, 11 members of ATSUM, ANSAM and KSO were pulled up by police in connection with the indefinite economic blockade imposed by the three organisations.
The three student bodies were imposing an indefinite economic blockade on National highways since November 22 urging the State Government to convene a special session of the Manipur Legislative Assembly and discuss the Manipur (Hill Areas) ADC Bill 2021.
In a surprise crackdown upon the blockade sponsors, a combined team of Nungba Police and a special commando unit of Manipur Police arrested 11 blockade sponsors from Nungba along Imphal-Jiribam highway at around 11.30 pm yesterday.
They were brought to Imphal last night itself, informed a source.
According to the source, the 11 members of ATSUM, ANSAM and KSO went to Imphal-Jiribam highway as their economic blockade was ineffective  on the particular highway.
They were detained in three police stations at Imphal.
The arrested blockade sponsors included ATSUM president Paotinthang Lupheng, general secretary SR Andria, information secretary Khaiminlien Doungel, assistant information secretary Thoshrii, forest and environment secretary TP Dining, assistant forest and environment secretary Marankhai, secretary rights and reservation Shimthar Jajo, joint secretary assembly affairs Mathew Rawangbe, ANSAM general secretary AC Thotso, KSO joint secretary Thangmang and executive member S Tony.