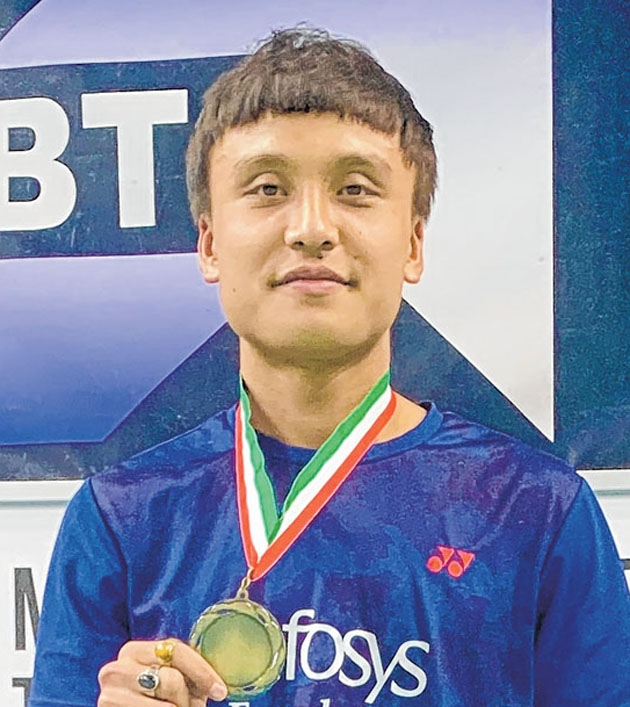 By Our Staff Reporter
IMPHAL, Nov 7 : Maisnam Meiraba Luwang had his way to this year fourth international medal winning a bronze medal at the ‘46th VICTOR FZ FORZA Hungarian International Championships 2021’ which was held in Budaors, Hungary from November 3 to 6.
The ace shuttler from Manipur entered the championship as qualifiers and defeated three opponents to make it to the main round.
Having won his first senior category gold medal for India at the Yonex Latvia International Future Series Badminton tournament in August this year,  Meiraba defeated Slovenian Gregor Alic 21-9, 21-4 with much ease in the opening match and extended the winning streak beating host Marton Szerecz 21-14, 21-11 and Finland's Joakim Oldorff 21-18, 21-12.
In the main draw's first match, Meiraba secured a 21-14, 13-9 win as his Slovenian opponent Milan Dratva retired.
In the round of 16, Meiraba saw off second seeded Kim Bruun of Denmark 21-11, 21-18 and marched into the semi-final by edging out defending champion Jia Heng Jason Teh of Singapore 17-21, 21-18, 21-18 in a competitive quarter final clash which lasted 1 hour and 24 minutes. It may be noted that Kim Bruun is an established players with 11 senior international titles in his name.
However in the semi-final, exhausted Meiraba suffered a 9-21, 21-18, 21-12 loss to Denial Nikolov whom he defeated to clinch Bulgaria International Badminton Tournament last month.
Meiraba, who was ranked 1500 in the World Badminton senior ranking initially, was able to achieve 229 rank before the Hungarian International Badminton Championships 2021.
It may be noted that the 18 year old player had earlier secured his first bronze medal in the Victor Ukraine International Series Badminton Tournament 2021 which was hosted at Kharkiv, Ukraine in September.