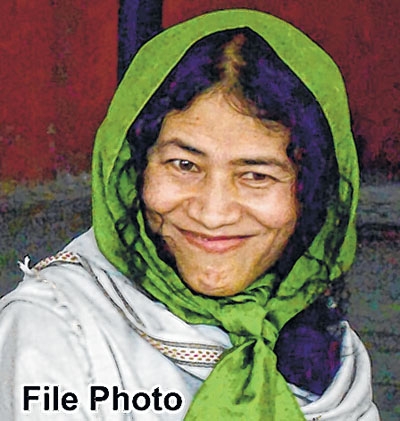 Kolkata, Dec 13
Rights activist Irom Shar-mila, who was on a 16-year hunger strike against the Armed Forces (Special Powers) Act (AFSPA), feels the recent killing of civilians in firing by security forces in Nagaland should be an eye-opener to repeal the contro- versial security law from the Northeast.
Sharmila said the AFSPA is not only an oppressive regulation, it tantamounts to gross violation of the basic human rights.
The AFSPA empowers security forces to conduct operations anywhere and arrest anyone without prior warrant. In the Northeast, it is in force in Assam, Naga-land, Manipur (excluding Imphal Municipal Council Area) and some districts of Arunachal Pradesh, bordering Assam.
“The Nagaland incident has once again shown why the draconian AFSPA should be withdrawn from the Northeast. It should be an eye-opener. Human lives are not so cheap. For how long will the people of the region suffer because of it? In the name of battling insurgency, you can’t take away people’s basic rights. There are other ways to tackle it,” Sharmila, who ended her marathon hunger strike in 2016, told PTI in a telephonic interview.
At least 14 civilians and a soldier were killed in a botched anti-insurgency operation and retaliatory violence on December 4 and the following day in Nagaland’s Mon district.
“After passing of the Act in 1958 and subsequent implementation in the North- east, did it achieve the desired purpose?
If not, what is the use of thrusting it on the masses? It’s high time the Centre and State Governments sit together and take a relook at AFSPA,” she said.
Critics maintain that the AFSPA has failed to control insurgency despite giving armed forces powers to act with impunity, sometimes leading to human rights violations.
Nagaland Chief Minister Neiphiu Rio and Meghalaya Chief Minister Conrad Sangma have also demanded that the law be repealed.
Asked if its withdrawal from the Northeast would worsen the law and order situation in the area, Sharmila replied in the negative. “There are other ways to tackle insurgency. In Chhattisgarh, there have been several Maoist incidents; so did the Government impose AFSPA there? The answer is no. The security forces are tackling it in that State, and they have been successful. The same can be done in the Northeast,” she said.
Claiming that people from the Northeast have to face discriminatory treatment in other parts of the country, Sharmila, who unsuccessfully contested the 2017 Manipur assembly elections, said the “rampant violation of human rights in the name of AFSPA stems from that discrimination”.
“We are harassed and humiliated. You have to change your mindset and treat the people of this part of India as your own,” she said.
The Iron lady of Manipur’ also said she has realised that her lengthy hunger strike did not achieve its purpose.
“All my life, I believed in the Gandhian principles of non-violence. My fast was a non-violent way of registering my protest and press for the people’s demand. But after 16 years, when I ended my hunger strike, a lot of people misunderstood me. It failed to accomplish any purpose,” she said.
Sharmila said she has nothing against the armed forces, but politics and political parties have failed the people of the Northeast.
She condoled the demise of Chief of Defence Staff Bipin Rawat, saying his death is a loss for the entire Nation.
The 49-year-old rights activist, who got married in 2017 and is now settled in the southern part of the country with her family, also said she is not interested in giving another shot at politics. PTI