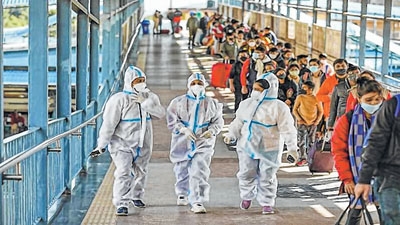 NEW DELHI, Dec 18
There will be definitely a third wave of coronavirus disease (Covid-19) in India once the Omicron variant starts repla-cing Delta as the dominant strain, according to members of the National Covid-19 Supermodel Committee. Vidyasagar, the head of the Covid Supermodel panel, told news agency ANI that the third wave, driven by Omicron, is likely to arrive early next year and peak in February.
"Third wave is likely to arrive early next year in India. It should be milder than the second wave due to a large-scale immunity pre-sent in the country now. There will definitely be a third wave. Right now, we are at around 7,500 cases per day which is sure to go up once Omicron starts displacing Delta as the domi- nant variant," ANI quoted Vidyasagar as saying.
He, however, said that India witnessing more daily infection than the second Covid wave is “extremely unlikely”. Vidyasagar, who is also a Professor at IIT Hyderabad, underlined that the vaccine program was extended to those other than frontline workers when the Delta variant had just hit, suggesting that most of the population was unvaccinated during the start of the second Covid wave.
Citing the seroprevalence data in India, the IIT Professor further stated only a tiny fraction of the public has not come into contact with the coronavirus.
"So the third wave will not see as many daily cases as the second wave. We have also built up our capacity based on that experience, so we should be able to cope without difficulty," he added.
Vidyasagar said the number of cases would depend on the ability of Omicron to escape vaccine- induced immunity and natural immunity by prior exposure to the virus.
“Because these are not known, we have generated various "scenarios," assuming (for example) 100 per cent vaccine protection remains, or only 50 per cent remains, or all of it goes away. The same for natural immunity escape. For each scenario, we project the number of cases that could result," he said, adding that India will not have more than two lakh cases per day in the worst-case scenario.
But he cautioned that these are projections and not predictions, which could be made once there is more data to show how it is “behaving” with the Indian population.
Another panel member, Maninda Agrawal, said India is expected to report one lakh to two lakh cases per day which will be less than the second wave, reported ANI. Although the UK has high vaccine penetration, Agrawal said, it has low seroprevalence.
“The UK also has an older population as well as more problems with obesity etc. This is why yesterday the UK had 93,045 cases while India, with 20 times the population, had 7,145 cases. In my view, people trying to draw inferences about what would happen in India, based on what is happening in the UK, would be making a major error,” Agrawal added, as quoted by ANI.
India has detected over 100 cases of Omicron cases so far. NITI Aayog member (Health) Dr VK Paul cited the steep rise in infections in Britain to sound alarm bells. Hindustan Times (with ANI inputs)