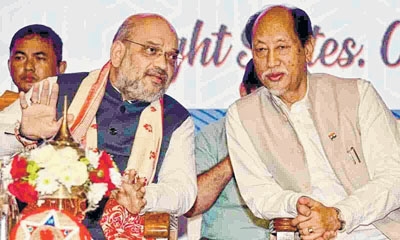 NEW DELHI, Dec 1
Nagaland Chief Minister Neiphiu Rio on Wednesday said the peace talks between the Centre and Naga insurgent groups have reached a stage where he is hopeful of an early resolution to the decades-old issue. He said the Nagas continue to earnestly wait for a solution.
He added the State’s elected leaders have come together to form an Opposition-less Government (United Democratic Alliance) to facilitate an early settlement of the problem. “Through this united front, we aim to convey the voice of the people to all stakeholders involved in the negotiations,” Rio said on the occasion of Nagaland’s 59th Statehood day.
He said Nagaland achieved statehood close to six decades earlier and the quality of life of its people has improved significantly since. “...despite achievements in various fields, a lot remains to be done. The Government is committed to taking necessary steps for all-round development and to ensure that people are provided with the best opportunities for growth and progress.”
Nagaland Governor Jagdish Mukhi, in his message on the statehood day, said Nagaland has endeavoured over decades to achieve peace. “Peace is more than desired; it is a must for the advancement and achievement of the fullest potential of the State. I am hopeful that with the collective efforts of all, we will succeed in ushering stable peace in our State and the desire of the people for a vibrant and thriving Nagaland will no longer remain elusive but materialise before long.”
In 2015, the Centre signed the Framework Agreement with the Isak-Muivah faction of the National Socialist Council of Nagalim (NSCN-IM) after 18 years of truce. The talks were halted in October 2019 over issues pertaining to the agreement.
The NSCN (IM) remained firm on its demand for a separate Naga flag and constitution.
This is believed to be the main reason for the delay in a final deal to settle the issue. Negotiations resumed in September after the Centre named former Intelligence Bureau Special Director AK Mishra as its emissary to revive the stalled process.
The Centre also signed “Agreed Position” with seven other Naga national political groups in 2017. Leaders of the groups, NSCN (IM) and Nagaland’s top politicians led by Rio are believed to have held a series of meetings in Delhi on how to take forward the dialogue. The Centre has sought two months to iron out certain contentious issues and the talks are likely to resume in early 2022. Hindustan Times