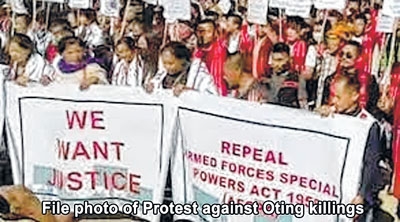 NEW DELHI, Dec 21
As 2021 draws to a close, the Home Ministry would focus more attention to the North East region of India in the aftermath of an ambush in Manipur in which Assam Rifles’ commanding officer, his son and wife and other jawans died, and the security botch-up in Nagaland in which 14 civilians were killed. The region is simmering with protests demanding the repeal of AFSPA, and extra vigil is being maintained over the Myanmar border in view of the Manipur Assembly elections in 2022.
The Ministry is also battling Maoist insurgency after 22 CRPF jawans were killed in an ambush by hundreds of Maoists in Bijapur district of Chhattisgarh in April.
The Maoist activities in the Red zone, however, have decreased as the Left-Wing Extremism (LWE)-affected districts under the Security Related Expenditure scheme reduced from 126 to 90 in April, 2018 and further to 70 in July, 2021. In December, Odisha Chief Minister Naveen Patnaik announced that five districts—Angul, Boudh, Deogarh, Nayagarh and Sambalpur—have been declared “LWE free”. According to the Home Ministry, the incidents of LWE violence have dipped by 70% to 665 in 2020 from all-time high of 2,258 in 2009.
Besides the two fundamental challenges for the MHA going forward, 2021 was fraught with one of the biggest movements of Independent India – agrarian protests over the three contentious laws, which were repealed by Parliament in the winter session. The protests, which started last November ended this year, saw a section of farmers climbing atop the Red Fort and hoisting ‘Nishan Sahib’ (the Sikh triangular flag) on the historical monument and waving flags from the ramparts on the Republic Day (January 26, 2021).
Amidst the agrarian protests in January, the Home Ministry was also helping State Governments carry out the vaccination drive that was initially opened for 60-plus citizens in the second year of Covid-19 pandemic. Little did it know that the situation would transcend into one of the biggest tasks for the Modi Government. The Ministry was coordinating with States over the shortage of oxygen and beds while running the world’s largest Covid centre (with around 10,000 beds) in Chhattarpur in Delhi during the ferocious second wave that hit India in April.
In poll-bound Uttarakhand, the Ministry carried out relief works along with the State Government at the National Thermal Power Corporation’s hydro project in Tapovan, which was hit by an avalanche in the upper catchment of Rishiganga in Chamoli district.
Problems and Prospects in North East
The North East region, which had a low profile, became one of the key concerns for the Union Home Ministry especially after the ambush by the Manipur-based People’s Liberation Army and the Manipur Naga People’s Front (MNPF), the umbrella organisation of three small outfits, in November in which Assam Rifles’ commanding officer Colonel Viplav Tripathi, his five-year-old son and wife were killed along with his driver and other jawans.
It is expected that 2022 would see more such attacks and clashes between the security forces and militant outfits as intelligence inputs point towards China’s growing support to the groups to destabilise the North East region.
Besides, the situation is also tense in Nagaland after the Indian Army’s Special Forces killed 14 civilians in Oting village in Mon district early December. Locals have been protesting over the incident and there is a high possibility of militant groups taking advantage of the situation in the coming days amidst the border tension with China.
The year also saw Tamil Nadu Governor RN Ravi resigning as the Interlocutor of Naga peace talks in September as the Government was reportedly unhappy over the handling of the process by Ravi who openly opposed the demand of insurgent group NSCN (IM).
The old boundary dispute between Assam and Mizoram in August led to violent clashes in which at least five Assam police personnel were killed. Mizoram’s civil society groups blamed “illegal Bangladeshis” in Assam for the border row. The MHA had in December informed the Lok Sabha that a total of 11 States and one Union Territory have boundary disputes between them and “occasional protests and incidents of violence are reported from some of the disputed border areas.”
“There are boundary disputes arising out of demarcation of boundaries and claims and counterclaims over territories between Andhra Pradesh-Odisha, Haryana-Himachal Pradesh, UT of Ladakh-Himachal Pradesh, Maharashtra-Karnataka, Assam-Arunachal Pradesh, Assam-Nagaland, Assam-Meghalaya, Assam-Mizoram,” the Home Ministry had said in a written reply to the Lok Sabha during the winter session.
Strengthen Investigation, Intelligence Agencies
The Home Ministry would also bolster its Central agencies such as the National Investigation Agency, Narcotics Control Bureau and Intelligence Bureau in the new year.
More recruitment of personnel and officers in different agencies will take place in 2022. The MHA is in the process of introducing a direct entry at the lower level in the NIA. Similarly, the NCB will also open zonal offices in 2022 after the approval of the Finance Ministry. Nearly 3,000 posts would be created to start NCB units in south India and the North East.
News18