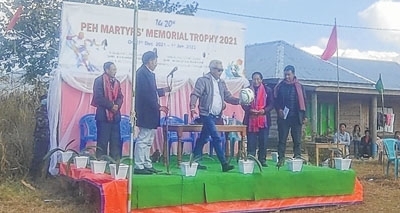 Mungchan Zimik
Ukhrul, Dec 27 : Chingai AC MLA, Khashim Vashum today inaugurated the 20th edition Peh Martyrs' Memorial Football trophy-2021 at Peh village ground, Ukhrul.
Vashum, while extending warm Christmas greetings to all villagers, urged the participating teams to partake in the tournament with true spirit of sportsmanship.
Speaking at the inaugural function of the tourney, the MLA announced that the State government has approved to establish one new Primary Health Centre in the village.
He also mentioned that he had proposed a water supply project for the village to resolve the water scarcity issue.
While lauding Nine Star Sport Organisation (NSSO) for organising the annual sporting event, Vashum urged youth to shed the mindset of dependency.
He also stressed on the importance of scouting talents from grassroots level and honing their skills to help them become professionals in their respective disciplines.
The tournament is being organised in commemoration of the "Peh Martyrs" who have laid down their lives in the Naga Nation struggle for self determination.
One minute of silence was observed as a mark of respect to the departed souls of Peh village before the tourney kicked off.
Altogether six football teams from Peh village are participating in the tourney.
Headman Mawonshang, village chairman Moon Shimrah, pastor, women & youth leaders, NPF leaders and others attended the opening ceremony.
The MLA Khashim on his return to Ukhrul also visited Paorei and Phungcham village and held interactive sessions with villagers.