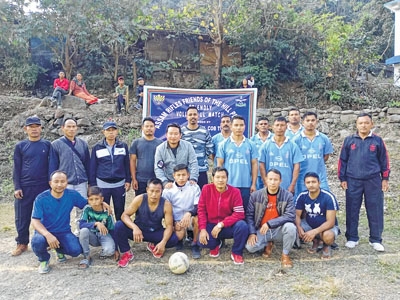 IMPHAL, Dec 28
Noney Battalion of Assam Rifles has organised a "Friendly Volleyball Match" under the aegis of 22 Sector Assam Rifles and Inspector General of Assam Rifles (East) at Tupul village, Noney district today as a part of Azadi Ka Amrut Mahotsav celebration.
The event was organised with an aim to promote "Fit India Movement", "Khelo India Campaign" and to strengthen the bond of affinity between AR troops and Tupul Youth Club, said PRO of AR in a release.
The event also focused on inspiring youth towards sports and physical fitness, it said.
The players and others present were also educated on the role of sports in human development and various career opportunities in the field of sports, both in forces and outside were also discussed, it said. Further, the locals were made aware of the upcoming Assam Rifles and Army recruitment rallies and preparation required to avail the opportunities, it said.
Sports items were also presented to the youth during the event held with strict adherence to Covid Appropriate Behaviours, it added.