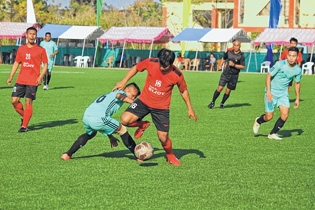 By Our Sports Reporter
IMPHAL, Feb 10 : UPSA, Pukhao and MPSC defeated their respective rivals to advance into the next round of the 11th Shaheed Manoranjan Singh Memorial State Level Open Football Tournament today at SAI, Sports Complex at Takyel.
In the first match of the day and tournament's 8th, UPSA defeated NEROCA 4-3 via penalty shoot out following a 2-2 draw during normal time.
It was indeed a neck to neck competition as NEROCA led 1-0 till the first half with Th Naocha goal in the 14th minute before A Sanathoi pulled level for UPSA in the 55th minute. M Sushil helped NEROCA regain the lead in the 57th minute but the lead was short-lived as UPSA got the equaliser yet again through N Raju the very next minute.
After settling the normal time in a 2-2, only A Kinish, Y Sonam and Lanjolung could score for NEROCA in the penalty shoot-out against UPSA's four converted by L Binoy, N Rupachandra, A Sanathoi and N Raju.
Later, MPSC earned a 2-1 comeback win against TRUGPU, Nambol to secure the next round berth.
L Jackson gave TRUGPU a 1-0 lead till the break with his strike in the 31st minute but MPSC clawed back into the game with Kanta hitting the equaliser in the 47th minute before Umakanta helped overturn the lead in the 56th minute and sealed the deal for MPSC.
February 11 matches
SSU, Singjamei vs NESU, Khurai at 9.15 am ;
YUFC, Ukhrul vs YUC, Irom Meijrao at 12.15 pm and
ESU, Wangkhei vs FC Lamjao at 2.45 pm.