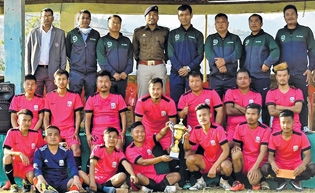 By Our Sports Reporter
IMPHAL, Feb 11 : Hnahringkhu YC emerged champions of the ADC Chandel Trophy Super Division Football League 2020-21 organised by District Sports Association Chandel after defeating Tampi FC YC 4-1 in a dramatic tie-break.
As expected, the two sides gave fine performances till the final minutes to take home the big win, however, it was Hnahringkhu YC which came out stronger.
Tampi FC which entered the final after securing a 2-0 win over Kapaam DC  in the semifinal started their today's campaign strong as they led the game from the very beginning of the match, thanks to Shetngam goal in the 2nd minute.
Unwilling to go down without a fight despite a 1 goal deficit, Hnahringkhu made a series of attempts and  came back in the game with an equaliser from Hnahringkhu YC in the 32nd minute.
Since then, none of the teams could break the deadlock and ended the normal time without a winner, which ultimately paved a way for penalty shoot-out to decide the winner.
In the shoot-out, Hnahringkhu's goalkeeper saved all the three shots while Tampi's missed all.
Jaon and, Warkham and Thaniwar are the penalty takers of the winning team.
Shetngam was named a man of the final match which was sponsored by MAK Lubricant and Chandel SP, Mowarning.
Meanwhile, best goalkeeper, best player and best fair play team titles were given to Nikerson W of Liwa Sarei YC, Thaniwar of Hnahringkhu YC and Tampi FC respectively. These three awards were sponsored by Diana Computer, Chandel