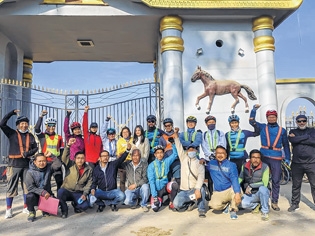 By Our Staff Reporter
IMPHAL, Feb 12: 600 BRM (Brevet de Randonneur Mondiaux) was flagged off today from Palace Compound by Manipuri actor Soma Laishram.
600 BRM (Brevet de Randonneur Mondiaux) is an ultra cycling event organised by ultra-cycling wing of Manipur adventure and Mountain Biking Association (MAAMBA) with the target set for completing the 600kms course within 40hours limit. The ultra-cycling event is a part of Super Randonneur Series (Paris) and the follow-up of the 400 BRM which was completed recently.
Speaking at the flag-off event, Dr Ng Arunkumar Singh, president, MAAMBA, said BRM event was initiated by Audax Club Parisien based at Paris and the event in Manipur was organised under the aegis of Audax India Randonneurs (AIR).
The 10 cyclists competing in the 600 BRM will cycle to Keithelmanbi, Kangpokpi, Dolaithabi, Yaingangpokpi, Nongpok Sekmai, Pallel and return to Imphal Hotel and will head out again for Churachandpur and flag in at the office of MAAMBA at Thangmeiband on February 15, he added.
Dr Ng Arunkumar also urged the Government to make dedicated cycle lanes to encourage cycling as a form of exercise and transport.