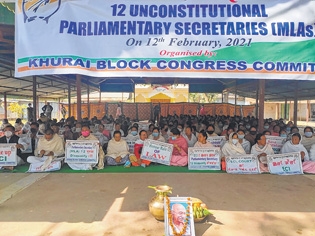 By Our Staff Reporter
IMPHAL, Feb 12: Congress workers continued their protest demanding the disqualification of 12 MLAs who had earlier held the post of Parliamentary Secretaries and said stronger agitation is on the cards if the demands are not met.
A protest demonstration cum relay hunger strike was held today at Yumjao Lairembi community hall, Khurai Angom Leikai by the members of Khurai Block Congress Committee.
Khuraijam Ratankumar, secretary, Manipur Pradesh Congress Committee (MPCC), said the directives of the Supreme Court and order of the High Court have not been followed by the Government and the 12 MLAs are yet to be disqualified. This, he added, is condemnable and the Congress party stands against such form of disregard for the Constitution and rule of law.