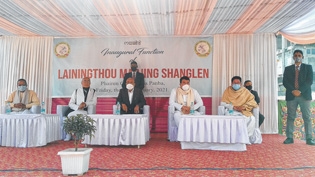 By Our Staff Reporter
IMPHAL, Feb 12: Construction of community halls at playgrounds in localities has limited the availability of open spaces to children.
Chief Minister N Biren Singh said this at the inaugural function of 'Lainingthou Marjing Shanglen' and urged everyone to stop construction works by filling up local ponds, playgrounds etc.
He said activities including filling up of ponds, construction works at playgrounds, felling of trees in large number has resulted in ecological imbalance and climate change which has become more evident recently.
The Chief Minister added that the State is moving forward in every aspect of development, the relationship between various communities in the State has been improved and mutual feelings of oneness, respect and love for each other has increasingly become a reality. There was once a time when people didn't appreciate others for their good deeds and tried pulling them down, this too has gone now replaced by sincere appreciation for the good deeds and success of other people, he added.
The ground in front of the newly constructed 'Lainingthou Marjing Shanglen' despite being small has produced many prominent personalities in the past and it needs to be developed, the Chief Minister said. He urged the local clubs and temple board to come up with a plan to develop the same and also assured his assistance in the development works.
Thangjam Arunkumar, president NEROCA, said climate change is the worst problem that mankind can face, and the forefathers had realised this long before any modern scientist came into the picture and provisions for protection of forest and nature by worshipping 'Umanglai'. He added that all should stand against the construction of community halls by clearing trees and should move  towards preserving nature.
The inaugural function was also attended by Social Welfare Minister Okram Henry; Abujam Thoiba, ex-president Lainingthou Marjing Thougal Lup and Takhellambam Madhob Singh, president Lainingthou Marjing Thougal Lup.