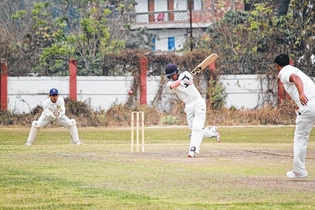 By Our Sports Reporter
IMPHAL, Feb 20 : PTRC, Patsoi notched up their third straight win in the 5th MNCA Elite Tournament 2021 by trouncing Model, Chingamakha by 8 wickets today at Luwangpokpa Cricket Stadium, Luwangsangbam.
Having thrashed TRAU and YWC in their previous matches, PTRC remained on top of the Group B table with 6 points.
MODEL chose to bat first after winning the toss but had to bundle out on 97 in 30 overs of the total 40 as PTRC bowlers wreaked havoc across their batting line up.
Y Karnajit with 28 runs and L Superjit with 18 runs were the only double digit scorers in this innings as S Kenjit, Kiran and Alfred Hmar of PTRC pressed hard and shared three wickets each.
After bowlers executed their roles perfectly, M Gemson (21 not out) and Abit (25 not out) helped PTRC cruise to 100 in 24.3 overs with 8 wickets left in the hand. Earlier Kh Santosh posted 34 runs to set the pace of the chase.
Priyokumar and Th Iboyaima of MODEL were able to pick up a wicket each in this innings.
L Kiran of PTRC who scalped three wickets for 5 runs in 6 overs (3 maiden overs) was eventually named man of the match.
THAU will play Al-Ameen tomorrow in the next Group A league match.