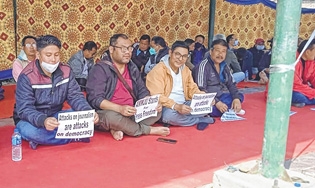 By Our Staff Reporter
IMPHAL, Feb 19: Taking strong exception to the act of hurling a hand grenade at the office of the Poknapham and its sister publication the People’s Chronicle, newspapers based at Imphal suspended daily publication for six days while private TV channels suspended broadcasting of news for five days.
One unidentified miscreant lobbed a hand grenade at the Keishampat Thiyam Leirak office of the Poknapham at around 6.38 pm of February 13. The grenade landed at the threshold of the front office but it failed to go off.
While a police team retrieved the grenade, Imphal West SP K Meghachandra came and made an assessment of the crime scene.
According to footages collected from CCTV cameras, the grenade was hurled by an individual dressed in female attires who came on a Honda Activa scooter.
After lobbing the grenade, the individual left the scene on the same scooter through Keishampat Thiyam Leirak.
A joint emergency meeting of AMWJU and EGM was held at Manipur Press Club the same night and it was resolved to suspend publication of newspapers as well as broadcasting of news.
The emergency meeting also resolved to stage protest demonstrations from the next day.
In the meantime, IPR Minister Th Biswajit came out with a statement condemning the grenade attack in the strongest term.
He said that there was no place for such acts of threatening media in a civilised, democratic society.
On the next day, journalist fraternity of the State staged a sit-in-protest at Keishampat Leimajam Leikai community hall denouncing the attack.
Another joint meeting of AMWJU and EGM was held on February 15 and several resolutions were adopted.
The meeting resolved that all concerned should issue a clarification regarding the grenade attack to AMWJU and EGM within 48 hours, and the Government should apprehend all those involved in the attack within 48 hours.
The sit-in-protest continued on February 16 and 17 too.
In the meantime, Congress MLA Kh Joykisan raised a call attention motion in the State Assembly regarding suspension of publication of newspapers and broadcasting of news by private TV channels.
Replying to the call attention motion, Chief Minister N Biren informed the House that a four-member SIT has been investigating the incident.
The Manipur Hills Journalists Union too condemned the attack in the strongest term.
Journalist unions based at Thoubal, Bishnupur, Kakching, Moreh and Jiribam too decried the attack on the media and staged protest demonstrations.
Another general body meeting of AMWJU and EGM was held yesterday afternoon and decided to lift the cease work strike.
The Police Department has announced cash reward of Rs 50,000 to anyone who provides information leading to the arrest of  the unknown individual who lobbed the Chinese hand grenade at the office of Poknapham and The People's Chronicle.
In a statement, the State police assured that the identity of the informant will be kept confidential.
For contact, the police shared the following numbers SP Imphal West (9612759705); SDPO Imphal West (8787533297); OC Imphal police station (7005625909) and OC/CDO Imphal West (9856136200).
Manipur Human Rights Commission (MHRC)  has also asked the Chief Secretary; Director General of Police (DGP), Manipur and Superintendent of Police Imphal West to submit the status report of the investigation on or before February 25 to the Commission and provide security to media houses.
It may be mentioned the MHRC took up a suo motu proceeding on February 17, stating that the February 13 incident violated certain basic rights of the people.