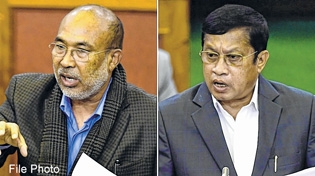 By Our Staff Reporter
IMPHAL, Feb 19: The State Assembly today passed a private member resolution which sought preservation and development of all the places in the State which are closely associated with Netaji Subash Chandra Bose and the Indian National Army (INA).
The INA memorial complex located at Moirang Kangla, all the places which served as INA headquarters, the surrounding places which are associated with the Indian freedom struggle, the old airfields of Pallel and Koirengei should be developed to such a level that they can draw international community. For development of these places, the State Government should send a proposal to the Central Government, asserted Opposition MLA K Ranjit  moving the private member resolution.
He pointed out that 2021 is the 125th birth anniversary of Netaji Subash Chandra Bose and many have already started celebrating the iconic freedom fighter’s birth anniversary.
As Moirang, Pallel airfield, Koirengei airfield and some other places of Manipur are closely associated with Netaji Subash Chandra Bose and the INA, special attention must be paid to these places, Ranjit said.
He reminded that the Indian National flag was hoisted for the first time at Moirang.
Even though it has been 72 years since India achieved independence, Manipuri people who fought for independence of India under the leadership of Subash Chandra Bose have not been given due recognition, he lamented.
Noting that the private member resolution initiated by the Congress MLA was quite legitimate and timely, leader of the House N Biren suggested that the Government may move the resolution before it is passed by the House.
The United Kingdom has accepted that the Battle of Imphal was one of the hardest and decisive battles of the Second World War, Biren said.
He suggested that the battlefield of Sangshak should be incorporated in the private member resolution.
The hole made on the roof of a house by a bomb dropped for the first time at Sangshak during the Second World War is still preserved by the house owner.
To preserve the house, an agreement has been reached for acquiring 6.7 acres by the Government and the house owner would be given an alternative house, Biren said.
The State Government    has also been talking with the Central Government on preservation of Koirengei airfield, Biren added.
Later, the State Assembly unanimously passed the private member resolution.